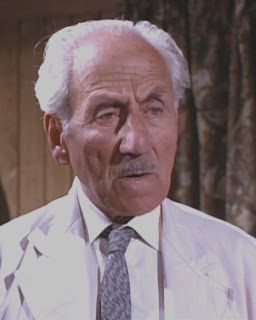 A couple of days ago I received an email from a friend who I am pleased to call ZM72, who talked about the abduction of Professor Seltzman in the Prisoner episode Do Not Forsake Me Oh My Darling. I trust ZM72 will not mind my using his most original thought, because it has to be said that I had not given any thought whatsoever to the abduction of Herr Hallen {Seltzman} from his Barbers shop in Kandersfeld in Austria. What might have happened had a customer walked into the Barbers shop while the Chauffeur was putting Herr Hallen's unconscious, and paraliysed body in a car? And there would be all the equipment in the basement to extract as well. And would not the sudden disappearance of the barber Herr Hallen not be reported to the Police, and what action might the local Police take? Or would the Chauffeur, an agent working for the Village, be able to deal with the local Police, in having the abduction hushed up? We know that Professor Seltzman and the Colonel/Prisoner were brought back to the Village. But then there is Potter to consider, he was not an agent of the Village, but working for Sir Charles Portland. The last we see of Potter was in the basement fighting with the Colonel {the Prisoner}, they too were paralysed by the effects of the nerve gas. Surely Potter could not be left to roam free, to report back to Sir Charles Portland as to what had taken place. Is it not possible that Potter was also abducted to the Village. So that's Seltzman, the Colonel/the Prisoner, possibly Potter, together with all the equipment in the basement of the Barber shop to take back to the Village......so the Chauffeur must have had help.
This just goes to show that there is still much to think about, to consider within the Prisoner, and I thank ZM72 for drawing this to my attention.  I'll be seeing you.
Posted by David Stimpson at 10:22