The Man Behind The Bars
Wednesday September 20th 2007 saw the publicity event for the Prisoner, which comprised of a morning screening followed by a buffet lunch. Then having been refreshed by their beverages and Canapes, the members of the press warmed to the occasion and seemed to find the proceeding something of a jolly affair. Perhaps it was the case that understanding the purpose or point of the Prisoner series was not the main issue. Both Magazine and TV reviews had to present some Prisoner pre launch details, although the general public at the time would not need to know anything at all about the press conference day itself.. 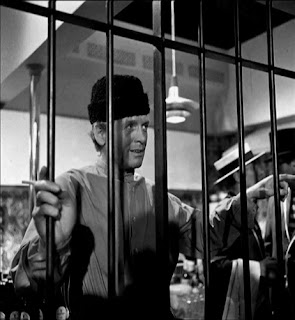 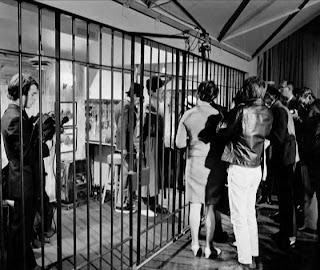 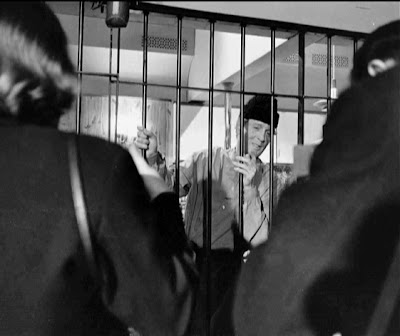 {pictures taken at the press conference }
Alexis Kanner soon got into the party mood by attempting a demonstration as how to ride a penny farthing, with added stabiliser wheels set either side of the farthing wheel. Unfortunately at the first attempt he unceremoniously fell off, only avoiding injury when Patrick McGoohan and an aide, who came to his assistance and caught him.
First Patrick McGoohan was dressed in his Cossack garb which he wore for the "Kosho" matches of Hammer Into Anvil and Its Your Funeral, topped with a black Russian hat when the 39 year old star of the Prisoner, finally held court from within the cage used in the episode of Once Upon A Time. Later he was dressed in his Wild West outfit of Living In Harmony, confusing the journalists as he clutched a copy of the Living In Harmony, along with a packet of Senior Service cigarettes in his left bandaged hand. The left hand which was grazed by one of the Kids bullets in the episode, this ready for more much needed filming of Living In Harmony that afternoon.
The event was held in one of the sound stages at MGM Studios, and the 'set' into which the journalists were ushered had been specially created by Prisoner Art Director Jack Shampan. He was always able to design the most startling and impressive settings from the leftovers of other productions, thus minimising the time spent in construction and reducing the volume of scratch-built scenery required.
Of course the cage from Once Upon A Time was the most dominant feature, but centre stage was the black spherical chair from No.2's office in the middle of a circle of table upon which was set the buffet lunch. McGoohan spent much of his time inside the cage along with Angelo Muscat in his butler attire. McGoohan also spent time actually serving the gathered journalists their buffet lunch!
Journalist Anthony Davis asked of McGoohan "Why are you dressed like this?" and "What's it all about?" to which McGoohan did not respond, but instead turned the tables immediately by asking "What did you think of the show? "How did you enjoy it?” What did you make of that ball?" “What did you think it was supposed to be made of?" What do you think its role is?" Did the old bicycle mean anything to you? "What do you think the role of the old bicycle is?" Such was McGoohan's style of answering questions with questions of his own, which only added to the already confused journalists.
But it was all in keeping with the Prisoner series, in the way that it created more questions than it answered, and possibly that of McGoohan himself at the time, who wasn't answering any questions put to him, but asking those questions of his own!
In doing this McGoohan successfully involved the members of the press, although they did not immediately realise it, in the first discussions on the meanings behind his enigmatic allegory.
Patrick McGoohan did emerge from his cage, the bars of which separated him from the journalists and at the same time acting as a barrier. Many photographs had been taken of Patrick McGoohan depicted him with some form of barrier between himself and his interrogators, either the spokes of the penny wheel of the penny farthing bicycle, the bars of the embryo room cage of Once Upon A Time.
Patrick McGoohan dominated the press conference, and after he had left things soon began to wind down, with the few journalists who were left, wanting to see some of the sets in neighbouring sound stages and to chat with some of the crew.
Never before, nor since I should imagine, has the media been given such a challenge to follow. The Prisoner is the most extraordinary series, a series which was equally matched by its extraordinary publicity as Patrick McGoohan made sure of. In the way he put the conference together, of his handling of the media during and after the launch day was a gauntlet few were able to both grasp and convey on par to their readers. They had been presented with something most unusual, a challenge the media rarely knows how to handle, treated with distaste and decisiveness as a trivial distraction. Little did they know, at the time, the following the series would achieve?
BCNU
Posted by David Stimpson at 08:04