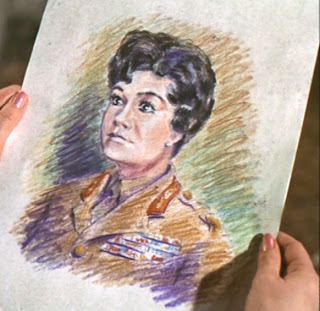 One can be forgiven in thinking that the village authorities are interested in nothing more than in the gaining and gathering of information. The manipulation of the citizens and the education of. Not to mention other matters such as surveillance, Identification, experimentation and rehabilitation to name but a few others. Yet there is an undercurrent which flows through the village, a sporting undercurrent, fencing, shooting, water skiing, boxing and Kosho for example for those who wish to demonstrate their athletic prowess. And then there's the artistic undercurrent which is preferred by many and indeed encouraged by the village administration. There are festivals, such as the one mentioned by No.24 in The Schizoid man, and the festival of the episode Dance of the Dead, which is one of they're little traditions of a carnival and dance with a Ball in the evening.
There was the "Exhibition of Arts & Crafts" from paintings and drawings to sculptures and all manner of crafts on display, No.38's tapestry for example. Even the General became involved, him being quite a "handy man" once. Its just a pity that more personal inspiration was not encouraged. Many of the citizens who entered their work in the "Exhibition of Arts & Crafts" chose the same subject, that of No.2! yet at least they were able to demonstrate their artistic temperament. As No.118 did in A Change of Mind, by painting the portrait of No.6.... "A perfect likeness" in an abstract sort of way!
Photography is also encouraged, you will recall how No.24 was entered in the photographic section of the village festival, as well with her mind reading act, which No.6 not only helped her with, but encouraged. Sharing as he did, a mental link with Alison-No.24. And on the literary front, there are poets in the village, such as No.42 in the episode of A Change of Mind. No.42 was deemed to be unmutual when she failed to acknowledge No.10's greeting, too busy composing poetry was her defence!
So this then is the other side to the village, a cultured side, a place where "Arts& Crafts" is encouraged, hobby crafts, painting and sculpture. The professor's wife holds art seminars. then there's the "" where gambling takes place, with old time music hall entertainment, amateur dramatics and so on. Perhaps you have seen this type of activity before? In films of Second World War, Prisoner of War camps run by both British and Germans. Where anything can take place, and indeed is encouraged but does not included escape attempts, by the wardens in order to keep the prisoners occupied. Of course the same could be said of the village, only unlike a prisoner of war camp, no one is allowed to leave the village, well save for certain individuals. But there is no better way in keeping the citizens of this community occupied. And not only that, if you settle down and join in with the community the village can be a very nice place. And don't forget you can also gain an education through both the General and Speedlearn, and without the homework. The only thing is, like science, education can be perverted. Where the General and Speedlearn are concerned when and who are fine, but not what and why?
So this is simply another facet of the village. Once you have given them what they want, have settled down and joined in, you are left relatively alone to live out the rest of your life in relative peace and comfort. To be able paint and draw, take photographs to your hearts content, gamble your weeks credit allowance away in "The Palace of Fun," rather like the gambling world of giant casinos and on-line gaming sites.
But this cultural side of the village proves that there is much more to the village and it administrators than might at first appear. Its not all questions, interrogations and experiments you know. "That's just how things appear to be to you my friend" as No.2 might once have said.
You know, I've sat here at my desk for more days than I care to remember over the years, thinking in broad concepts about the Prisoner, and have enjoyed every minute. Although Patrick McGoohan might have wondered why I have been wasting my time in such a way, why can't I find something more worthwhile to do? Well in truth I've no idea what Patrick McGoohan might have had to say about my activities to do with the Prisoner. All I can say is, McGoohan and the Prisoner have made me where I am today....a Prisoner!

Be seeing you.
Posted by David Stimpson at 09:12