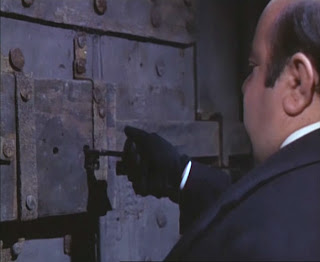 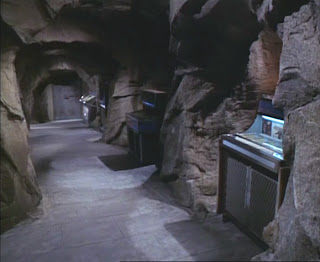 At the far end of this underground passage is a plain wooden door, which leads through into a large underground cavern. Between here and there are a number of alcoves, each containing a Juke Box and each playing the same record The Beatles song All You Need Is Love. But originally each of the Juke Boxes were to play a different record creating a "wailing cacophony" of sound! Why so many Juke Boxes, well that is  about as inexplicable as the question of how the Butler obtained the key to that door at the far end of the underground passage. I didn't see the Supervisor hand the Butler a key. Although it's possible that he had had the key in his pocket all the time. On the other hand, this key might very well be the same key that unlocked the bars of the cage back in the Embryo Room, it being some master key to fit all locks in the village!