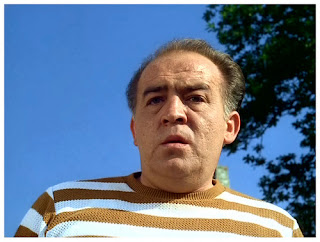 This is No.53-the Rook, who woke up one day to find himself in the Village because of his beliefs. He had invented a defence system, which he thought  both sides should have, as it would assure peace.
It's a pity really, beacuse last evening I was watching an episode of Callan which stars Edward Woodward in the title role, and Ronald Radd as Hunter. Now the man pictured on the left could be Hunter brought to the Village, if only Callan hadn't eventually shot dead Hunter, having been brainswashed by members of a Rusian spy cell operating in London. Well it was only a thought.
Be seeing you
Posted by David Stimpson at 09:13