Christmas Time In The Village

It's almost fourty-five years since my arrival here in the village, nearly fourty-five years ago when I first woke up to find myself amongst you. They gave me a home, a number, a credit card, health and welfare card, employment card, a card of identity, and a free ride home! And they have looked after me ever since that fateful day of my abduction and arrival here in the village!

And what is it they want to know in return? Why I resigned, why prematurely, now that's not too much to ask is it? Well after nearly fourty-five years they are no nearer understanding, or having any idea of what it was all about, why I resigned, even though they have been told!
Even when I told Number Two that it was for peace of mind, because too many people knew to much, he still didn't get it, perhaps because he didn't listen at the time, though it was a matter of conscience and Number Two did understand that bit. After all these years of asking questions, long interrogations and mind probing, they still don't know as much as they did when I first arrived here. But I give them full marks for persistence!
They moved me out you know. Out of '6 private' my 'home from home' and moved me into a single room in the old people's home! Oh the ignominy of it all, being helped into the ambulance by two male orderlies with a couple of suitcases for my few personal possessions.
In fair weather I sit outside on the lawn of the old people's home with a chess set on the table, ready for any likely opponent, and what's more I can still 'mate' in seven moves!
But at the end of the day here I am now, an old man with white hair and beard fit for nothing more than sitting in some fairy grotto dressed in a red suit as I do now.
"Ho, ho, ho, and what would you like for Christmas little girl?"
"Well Santa, I want to know why you resigned?" retorted the little girl sitting on Santa's knee.
"Well little girl, I resigned because for a very long time......just a minute, we don't celebrate Christmas here in the village, and I'm not Santa Claus!" pushing the little girl off his knee and onto the floor.
"I told you it wouldn't work Number Two" said Number Eight disappointedly, leaning on the penny farthing.
"He's a trained conspirator, a very hard man!" Number Two remarked.
"Who, Santa Claus?" asked Number eight
"No, Number Six, Number Six!" Number Two replied just as the big red telephone began to bleep impatiently.
Later that day Number Six again attempted to escape the village........ this time by sleigh and reindeers! 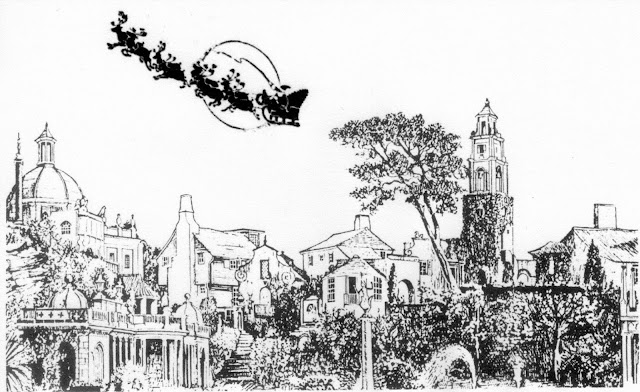 No. 113
Design from The Department of Visual records
Posted by David Stimpson at 08:47