Is that what the white Queen of Checkmate is, a pawn in the doctor-No.22's game of psychology? Is there nothing more to this woman, who has been hypnotised into thinking that No.6 is in love with her, and she with him. And in doing so has been turned into some kind of stooge, sent to protect No.6, to save him from his own folly! This in the fact that her emotions will send an alarm to control, if No.6 is going to try and escape, if she thinks she is going to lose him, via the 'reaction transmitter' in the locket about her neck.
No.8 volunteers herself to help No.6 with his plan, if its a good one, after all everyone tries to escape when their spirits broken. Which bodes the question, of who was it that broke their spirit in the first place? And besides she can be of use to No.6, at least she can tell him what not to try. This because she has often helped other people with their plans. But none of them ever succeeded, coincidence or something other than mere coincidence? Had No.8 been assigned to them, as she has been hypnotised into believing that No.6 is in love with her?
In her mind No.8 makes an honest attempt to gain No.6's trust, but is only scorned for her efforts. She is programmed to protect No.6, just in the same way the white Queen protected her pawn on the chessboard. Which is reason enough for the original title for this episode The White Queen's Pawn.
So we must ask ourselves why was No.8 in the hospital and in the hands of the doctor in the first place, and why was she picked for this experiment? Perhaps No.8 had been put through other such experiments by the doctor, and would be again.
If No.8 had not previously been some kind of stooge before, the doctor had certainly turned her into one by the time she had finished with her. If No.6 is the white pawn, what then must I ask, does that make No.8?
As the Admiral-No.66 told No.9 in Arrival "We're all pawns m' dear." 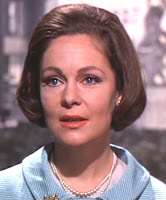 He was not afraid of women, but afraid of falling in love. A man of his character would never treat romance in a light-hearted manner. He avoided entanglements because he felt that the dangerous life he led would make it unfair to expect any woman to suffer the anxieties of being married to him. Marriage would also be unfair to him too. With the responsibility of a wife and family, he would inevitably feel more cautious in risking a life which was otherwise entirely his own, no-one left to suffer if he were killed. Marriage would ultimately affect his work.
"John Drake realises that he is getting older and is not yet married", McGoohan's own words, "Basically he would like the security of a home, marriage and a family, and he is beginning to feel that the time is approaching
when he must consider this before it is too late. He intends, however, to give {Janet portland - was she             up his job before he takes this step."
the reason why the Prisoner resigned?}
"He intends, however, to give up his job before he takes this step."
A very telling sentence, but I suppose, you would have to be of the opinion that the characters of the Prisoner and John Drake are one and the same, before you decide to take this seriously. However I am of the opinion that they are, and there are those who worked on the production team of the Prisoner, who have confirmed as much.
John Drake was getting older and wanted the security of marriage and a family before it was too late. The Prisoner, we discover in the episode of Do Not Forsake Me Oh My Darling is engaged to Janet Portland. The daughter of Sir Charles Portland, the direct superior to the Prisoner in the secret service, in better days of course. You will recall how it is described when the Prisoner asked Sir Charles Portland for the hand of his daughter. Sir Charles was pruning his Baccara roses down by the little goldfish pool. Sir Charles dropped his secateurs, although it could not have been all that much of a surprise. Perhaps it was shock, shock that anyone would wish to marry his daughter, this together with the thought that here was a man who was prepared to take his daughter off his hands.... at long last!
So the Prisoner resigned, he had given up his job just as John Drake had eventually intended to do. But was it for the woman he was engaged to? Janet Portland, a one time debutante, and now with a fiance in her grasp.  Middle aged man, strong, handsome, worldly. A man who would love her, take care of her, and perhaps above all, give her a secure life. And once her fiance had given up his job as a security agent, he would take a safe desk job, and be at home with her in the evenings, all nice and cosy. But there would be the round of social parties of course, which Janet would be used to, in her society circle of friends, but would her friends be those of her fiances?
Of course the Prisoner was used to parties, he regularly attended Madam Engadine's celebrated parties in , and would have met all kinds of people, including women. After all he was very friendly towards "B" in A B and C you will recall. And then there was Nadia-No.8 in The Chimes of Big Ben, with whom No.6 was beginning to get close. Nadia is much more the Prisoner's type I should have thought, rather than Janet Portland.
However, there could be hidden depths to Janet. And I'm sure that once she had her fiance within her grasp, she would not be a woman to let go of her prize that easily. But did she actually know that her fiance was going to resign his job? She probably didn't, as they could have discussed it.
Was she actually going with her fiance, wherever it was he had packed his suitcases to go?
Was the Prisoner going to take his fiancee Janet Portland with him? Somehow I doubt it.
These are questions which only two people can answer I'm afraid. For the rest of us, the situation between the Prisoner and Janet Portland, after their engagement, can only be a speculative one.