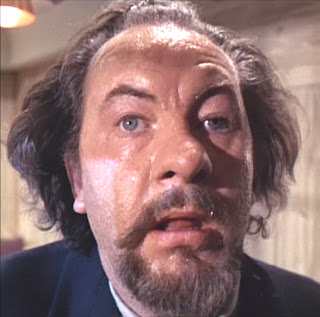 Poor old chap! No.2 put his life on the line in Once Upon A Time, he knew right from the beginning that it had to either one of them, him or No.6, and in the end No.2 paid the price with his life. But even then 'they' couldn't let him rest in peace. No.2 was resuscitated and put on trial for biting the hand that feeds. But I don't see that, because No.2 was loyal, his last act was to put his life on the line for the cause, so how is that biting the hand that feeds?
But how was it done? It must have been the drink, yet No.6 had drunk from the same bottle. I can only imagine that it was No.2's glass that was laced with either poison or some kind of drug before the drink was poured into it. Which leads to the question of who did it? Well I've watched the surveillance film footage of Once Upon A Time, and as far as I can see No.6 is never on his own long enough to have laced No.2's glass. That leaves either No.2 himself, suicide, unlikely. Which means the Butler did it, after all there are only the three of them locked for one week in the Embryo Room, the door operated by a time lock. But did the Butler do it of his own accord, or under instructions?   Perhaps the drug was one of the Supermoprobermates developed by the Village, as in It's Your Funeral. A drug which lays dormant until triggered by the nervous system and then it releases itself to give the desired effect.
Be seeing you.
Posted by David Stimpson at 08:51