Danger Man – Truth Behind The Fiction
The episode Under The Lake sees John Drake employed by Colonel Keller of US Intellegence to track down a counterfeiting gang who have flooded the capitals of with forged American banknotes to the value of $25 million. His only clue is an ex-Nazi, General Gunther Von Klaus and Kellers top suspect as the man who is distributing the forged banknotes.
The trail leads Drake to a lakeside hotel, the grounds once used to house a German concentration camp. To cut a 25 minute story short, Drake manages to round up the counterfeit gang and when he orders the lake to be dragged it reveals millions of counterfeit dollar banknotes, each commissioned by Himmler during the war.
The first two pictures are taken from the Danger Man episode, but is actual film of the search of Lake Topliz, note the diver and the floating platform in the second picture, and measure them againt pictures three and four. 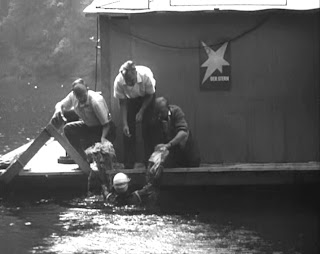 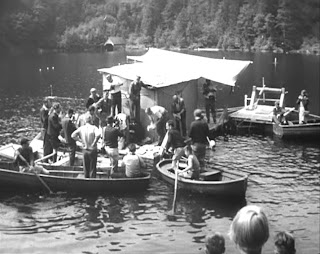 In July of 1959 divers retrieved a large number of boxes of counterfeit £5 notes from the bottom of in the Austrian Alps. What's more a second diving expedition to the Lake has been undertaken in recent years, with the result that even more forged bank notes were retrieved from the bottom of the lake, sealed in boxes. 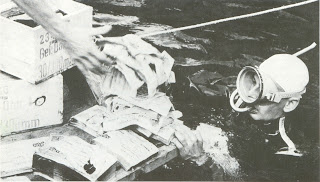 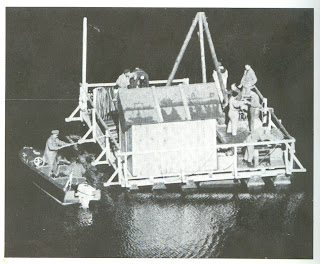 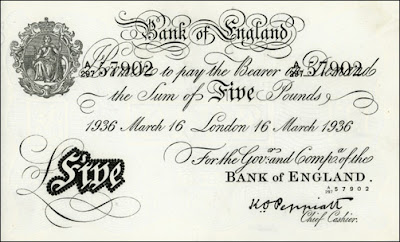 The notes from had been printed by the Nazis during World War II as part of a plan to destabilize the British economy, but had to be dumped in the lake by the retreating Nazis to keep the counterfeit banknotes out of the hands of Partisans and the ensuing armies! The German produced film The Counterfeiters {2007} is another link to this fact.
It is easy to see the comparisons between fact and fiction here. And this is just one example, because there are more Danger Man episodes steeped in factual stories, such as Don’t Nail Him Yet, and Colony 3. But they are two other stories, and perhaps for another time.
I'm Obliged.
Posted by David Stimpson at 14:55