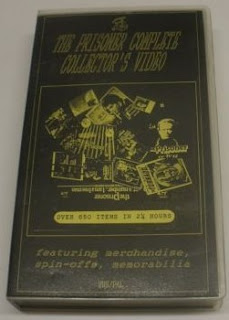 I know there are collectors of Prisoner memorabilia and merchandise out there, for I count myself amongst their number. Also there have been, over the years, many videos produced with the Prisoner in mind, the one on the left is one of them. As far as I recall it was produced in the mid 1990's, and is probably the most boring two and a quarter hours of video footage likely ever to have been filmed. Did I say boring? Yes, and downright tedious!
The atrifacts shown in the video are interesting enough, as the modern day fan of the Prisoner may very well have never seen many of the items filmed. But it is the way in which the items are filmed and tediously described z z z z z z z z z z z z z z! Are you still there? I suppose being a video about Prisoner memorabilia and mechandise, makes itself a piece of memorabilia, something to be collected. I have only ever watched one other boring and tedious video, and that was some years ago now, the infamous L.A. Tape. In fact the video is so boring and tedious that I never really watched it at all. A friend was showing it to my wife and myself, and she would fast forward the tape in an attempt to find something interesting!  I appologise the the tediousness of this piece of blog.   I'll be seeing you.
Posted by David Stimpson at 08:48