An Interview With The Prisoner Patrick McGoohan 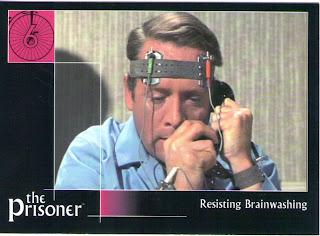 Perhaps you would like to tell those reading this why did you resign?
McG6 I can't tell you that.
Why not, is it a secret?
No.
Well then.......
Look who is this?
It's Dave.
Dave who?
Just Dave. So why did you resign?
You must not ask me that.
Was it because you became disillusioned with your former character John Drake?
Who told you that?
No-one.
He resigned.
Who?
John Drake.
No he didn't. I don't recall an episode in which John Drake resigned!
The ideas for the plots........
Yes, they became somewhat repetative didn't they.
The ideas were drying up.
Drake worked for MI9
M9
Oh, so you dropped the Intelligence bit!
Are you trying to be funny?
Look, just tell the readers why you resigned, and all the rest will follow.
That's been tried before!
Not by me it hasn't.
Who did you say you are again?
If you don't tell me, things will only get worse for you. You've had it too easy Number Six. From now on it's going to be very uncomfortable for you old chap.
You, you dare not hurt me. I'm important. They don't want a man of fragments. I have a future here!
I wouldn't put money on that. Now......lets get back to the beginning. Why did you want to make a television series like the Prisoner?
To be continued..............
Posted by David Stimpson at 09:40