Interview With The Prisoner Patrick McGoohan 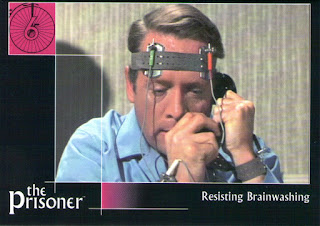 Hello Number Six.
McG6 Oh it's you!
Who did you expect?
No-one.
Well Number Six, this is it, my third and final chance to get you to talk.
Why, have you run out of time?
No, tomorrow I go on leave.
Don't bother to come back will you.
I'm disappointed in you Number Six. I'd have thought by now we would have been able to work together in this matter. Sooner or later you'll tell us what we want to know. Sooner or later you'll want to.
Unburden myself you mean.
If you want to put it that way, yes.
Look, I've got a recorder, I'll switch it one......
Are you asking this?
Yes.
Not the Colonel?
No. why do you ask?
Because I can't trust you. I can't trust the Colonel. I can't trust anyone!
Look, tell me what I want to know and you won't have to trouble yourself about trusting anyone else again.
Ask the Colonel, he knows.
Knows what?
Why I resigned.
Did you tell him, was it something we missed?
I wrote it down.
Wrote it down?
In a letter of resignation
Who has the letter now?
You don't have it?
No, not according to our records.
Then the Colonel must still have it. You should have asked him for it that time he was here.
It would have been as simple as that.................
{Suddenly the over-sized curved red telephone began to bleep impatiently and in that Number Two's fate was sealed}
Posted by David Stimpson at 09:08