A Right Falling Out! 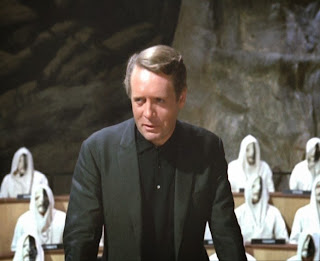 "I am glad to have this opportunity to address you today, nay I am privilaged and fortunate to stand before you here today.
I want you to know that I appreciate all the hard work you have done. But at the same time it was I who created the original idea for 'the Prisoner.' It was I who put the idea to Lew Grade. I who was given carte blanche to do as I like. I was the driving force behind 'the Prisoner,' as I forced my will upon the production. And when the project got into financial trouble it was I who went of to work in America to earn money to put into the project in order to complete the final four episodes. Otherwise we would not be here today. 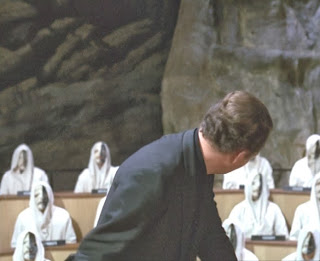 "Please gentlemen, I'm trying to give a speech here, and I can't hear myself think over that chanting of yours. So if you don't mind, just sit there and listen, you might learn something!" 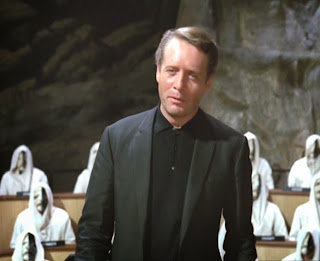 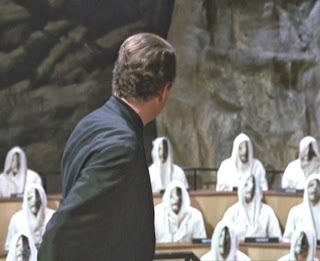 "Look! I won't tell you again! I appreciate everything you have all done on this project. But it's nearly over now, and you'll be able to go back to your ordinary lives. But for the moment I still pay your wages, you're still working for me. It's me that gave you the opportunity to be here today, to sit there in front of the camera, to be seen in this series, instead of being some non-entity working in the shadow of me. I'm the boss, and in my book that makes me Number One!" 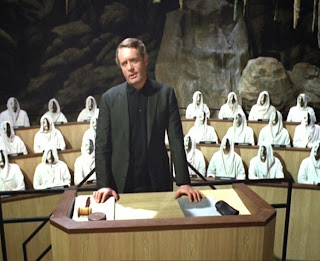 "I've said that people will want answers. Well why should I provide them, to make it easy for them? It's not up to me to expalin the thing I've created, it's for people to work it out for themselves. The series will be discussed and debated. What's more two people will never agree about the series, and yet both will be right. People will write about it. They will form groups, hold meetings, go on pilgrimages to the Village. Form an appreciation society or fan clubs, their members will go to Portmeirion and hold Prisoner Conventions. Enact scenes from  the series, play human chess and hold elections.
One day in the future, a man will come along and claim to be me - the Prisoner. He may look like me, dress and act like me, but you will know he is not me. And he must be treated as someone who he is, and that is not me!
Well that's about all I have to say. I think I'm ready to meet Number One. Well that's me again really!"

"Well I ask you, who else did you think Number One would be?"

Be seeing you
Posted by David Stimpson at 09:27