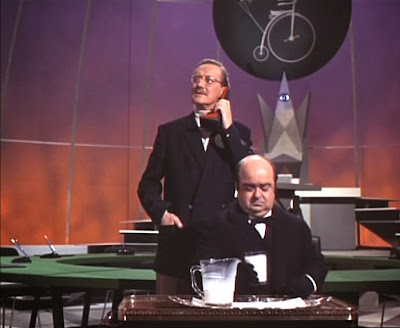 Strange isn't it, that the Butler hardly ever takes his gloves off! Perhaps its just etiquette. Maybe he has arthritis in his hands, no he wouldn't be able to pick that glass up like that if he had arthritis. perhaps he just doesn't like to leave his finger prints about! He could be the Bournemouth strangler! I think the only time the Butler does take his gloves off, is when he's giving No.2 a massage during 'The Chimes of Big Ben,' although Number 2 doesn't take his poloneck jersey off for that!