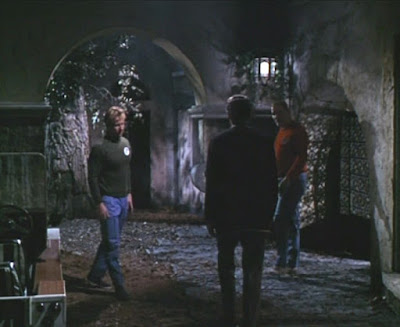 Occurs in ‘The Schizoid Man,’ when in the evening Number 6 leaves the cottage of ’12 Private’ and goes out into the night. He encounters two burly guardians, and stands there spouting some apparent rubbish about the atmosphere being very different here to what it was elsewhere. That’s probably because they are not actually in the village of Portmeirion, but on a film set at MGM studios.
So what’s the password one guardian asks? Gemini, Number 6 tells them. But that’s not the password, it may be that the guardian was expecting the password Schizoid Man. But even though it was the wrong password, it was the right password because Number 2 had given it to Number 6 himself, because when it gets gong even he wouldn’t be able to tell the pair of sixes apart. So Gemini was like a safety net for Number 2, after all if you can’t tell two people apart what would be the point in giving them both the same password? And that would have been true, had they both been wearing the same coloured blazer!
It was a lesson well learned by Number 6, that there must be two passwords. And it was just as well he was able to force the other password out of Curtis, that being Schizoid Man. Because it wouldn’t have done him much good standing there before the membranic Guardian saying “Gemini” over and over, because Rover might not have recognised that password either!