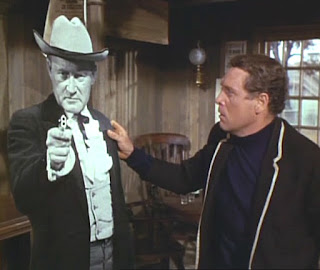 It ended with a gunfight between The Man With No Name and the Kid. The Kid may have drawn first, but The Man With No Name fired first! And there the Kid lay dead in the dirt of the street, He needed a drink after that, so he went into the Silver Dollar Saloon to be congratulated by the Judge. But The Man With No Name wanted out, he quit. But no-one quits on the Judge, he pulled a Derringer and shot The Man With No Name. After a while Number 6 wakes up lying in the dirt and the dust on the Saloon floor. He quickly gets up, divests himself of the radio microphone and head set, then seeing the Judge standing there instinctively goes for the Judge’s throat. Only to discover that the Judge is a life-sized cardboard cut-out! So what was going on here?
Confused, Number 6 dashed out into the street, into the Sheriff’s office, then back out into the street where he discovered the Kid had also been a cardboard cut-out. The Man With No Name had planned to escape Harmony, but things didn’t go according to plan. However it would appear that Both The Judge and the Kid had managed to escape the town of Harmony themselves, by substituting themselves with the life-sized cardboard cut-outs! Seeing as Number 6 is such a clever man, capable of turning his hand to most anything, it’s a wonder he never thought of that himself. To make a life-sized cardboard cut out of himself, stand it in a strategic part of his cottage, by the window perhaps so that he’s looking out, in order to fool the Observers. Then to disappear into the night, just as he did on the night of ‘Dance of the Dead,’ but to keep running and not look back!

It would have been worth a try, eh Number 6? Is it possible to overlay the cut out onto a picture then print it off and scan it in?
Be seeing you
Posted by David Stimpson at 07:15