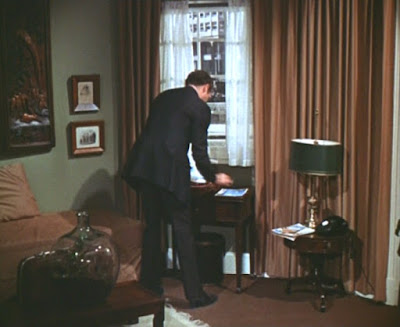 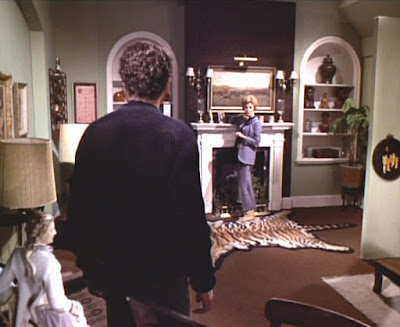 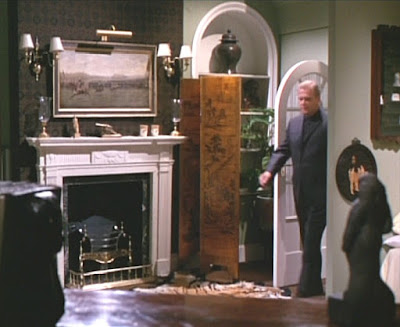 The house of No,1 Buckingham Place came fully furnished with the lease, we learn that much from Mrs. Butterworth. And yet she brought about subtle changes to the study. The green Carboy is replaced on the coffee table by a small white posy vase. The gold coloured screen in the corner by the door is missing. The three Vanity prints on the far wall from the door have been taken down and replaced by a large painting and two smaller prints. And there are two additions, a picture on the mantelpiece of her late departed husband Arthur, and a wedding photograph on the writing bureau. But basically the fixtures, fittings, ornaments, and furniture etc, etc are the same as when the Prisoner lived there before he went away.
In almost everyway this room has been replicated in ‘6 Private’ back in The Village, except here there isn’t a small window above the couch upon which the Prisoner first awakens in his new ‘home from home’, there is no French window leading out onto a small balcony.
When the Prisoner wakes up in his London home as the Colonel, there is one addition to the study, the framed photograph of Janet Portland. But the leather desk blotter, pen stand, stationary holder, two boxes and a notepad have gone, only a simple “Things To Do Today” pad sits upon the leaf of the writing bureau. And yet those items of deskanalia must have been the Prisoner’s rather belonging to Mrs. Butterworth’s, as they are replicated on the writing bureau in the study in ‘6 Private.’ And the same blotter can be seen on the bureau in the opening sequence of ‘the Prisoner.’ However the gold coloured screen is back in the corner, but not so the three Vanity Prints. Instead three watercolour paintings have been hung on the far wall facing the door.
Whether or not the Prisoner’s London home came fully furnished when he took up the lease is still open to debate. But if it did, he would have added a few personal touches of his own, with a few personal possessions, as Curtis had done when he moved into ‘6 Private’ in The Village. And the majority of the furniture, table lamps, the Canterbury, pictures, wood carving, statutes, ornaments etc, etc, didn’t change when Mrs. Butterworth moved in. Yes she had removed the three Vanity Prints, the carboy, and the screen, but perhaps they were not to her liking, and had been stored away in the cupboard, or one of the rooms upstairs.
The only really odd thing out is the framed photograph of Janet Portland. It isn’t there in the Prisoner’s study during the opening sequence, or ‘6 Private’ in The Village. If it had been in the study when Mrs. Butterworth had moved into the London house, then quite understandably she would have removed it and put it away in a cupboard somewhere. But seeing it wasn’t in the study in the first place, that hardly arises. The framed photograph of Janet Portland is contrived, as is the need for the character. Had it not been so, then when the Prisoner woke up in his London home, but in the guise of the Colonel, the study would have been exactly the same as when he had been gassed in it during the opening sequence. Well save for those three watercolour paintings hanging on the wall, instead of the three Vanity prints. That I feel was a mistake!