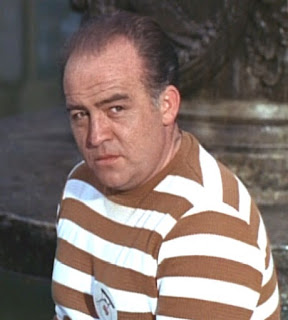 Hunter! You are “Colonel Hunter” Section Chief of the government department of British Intelligence known simply as “The Section?” No, obviously my mistake, seeing as how Hunter was shot and killed by Callan. But if you were Colonel Hunter, I’m sure they would find a position for you here, perhaps as Number 2. It’s ironic really, but perhaps ironic isn’t quite the right word. Because as each Section Chief of “The Section” was known as Hunter, each Chairman of The Village is known as Number 2! However seeing as Hunter is dead, the situation hardly arises.
You say you’re an Electronic Engineer? Well we’ll take that as read, because you yourself admitted that you have invented an electronic defence system. The trouble was you thought all nations should have it, as in your eyes it would have assured World peace. My dear chap you simply can’t go about with radical ideas like that in your head. After all see where it’s got you! But then what happened? Some bumbling bureaucrat let his bag, containing the plans to your electronic defence system, get swiped. You were pleased about that. Oh no, don’t be sorry, after all if anything goes wrong with “The Beam,” you are on hand to effect repairs. Well who do you think “swiped” the bag containing your plans? Yes that’s right. They’ve installed your defence system in The Village, well in the flagpole to be precise. It’s operated on a much smaller scale than you intended, but it’s the same defence weapon, it’s called “The Beam.” They once used it to bring down a pigeon. There, what think you of that? Not much I expect!