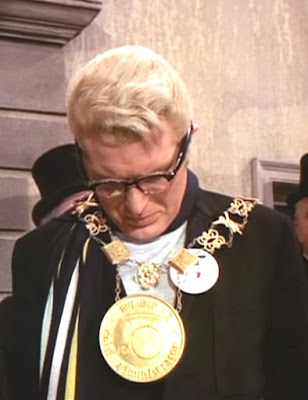 I bet you’re wondering how that happened, that it shouldn’t have happened in the first place! Well you know what they say, he who digs a pit will one day find himself lying in it! Perhaps someone should call for the bomb disposal unit. You could call Number 100 via that radio in your spectacles, then he might be able to call bomb disposal via that Dick Tracy style radio in his watch. Oh no, I shouldn’t because the signal from that radio might detonate the bomb inside that Great Seal. You are in a right predicament. But I suppose it could be worse. I know what you are thinking, how could it be worse? Well had that bomb been detonated as planned, you would now be scraping bits of the retired Number 2 off you. All that blood, guts, bone, and flesh all over the balcony and those people standing there, a traumatic event. Not only for those involved, but for the crowd gathered at the Gloriette who were in attendance of the Appreciation Day ceremony. It will be interesting to see how you get yourself out of this situation.

Be seeing you won’t we?
Posted by David Stimpson at 08:39