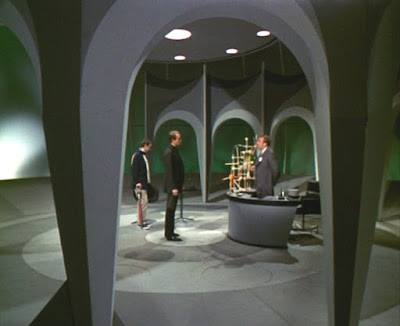 When the Prisoner, on the day of his arrival in The Village, is taken by Number 2 to the Labour Exchange for an interview. “Ah” says the manager “this is our new friend.” Well I think that’s calling it somewhat differently to how the Prisoner sees it. But in any case everything is ready. Does that mean the aptitude test has been set up? The aptitude test in which the square is circled, and not the other way around. Number 2 finds that amusing, but there’s no reaction from the Prisoner. Then the questionnaire, it contains questions about his race, religion, hobbies. What he likes to read, what he likes to eat. What he was, what he wants to be. Any family illnesses…….any politics? 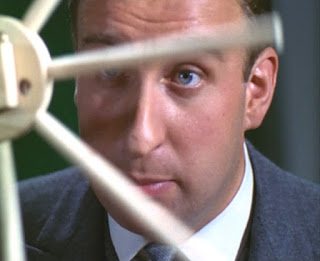 But the Prisoner isn’t in any mood to be filling in any such questionnaire. I’ve sometimes wondered if the Prisoner’s resignation had anything to do with politics, as that’s the one thing that makes him react, by throwing the managers toy out of the pram so to speak. But that might be simply coincidence, the Prisoner having had enough by that point. After all he’s been de-briefed once already by Number 2. And besides the Manager of the Labour Exchange can get all he needs from the file Number 2 leaves with him.
So why the Labour Exchange? It wasn’t as though the Prisoner was going to be issued with a job, although Number 2 had suggested during the aerial tour of The Village that he might be given a position of authority. He also said that he might even meet people he knows. Well that turned out to be right, starting with Cobb. Unless the Manager at the Labour Exchange, Number 20, was the first person the Prisoner recognised as being someone he once knew…..that of Potter from ‘Danger Man.’ And even if it isn’t the same character, the Prisoner had known Potter, because he met with him in ‘The Girl Who Was Death,’ what’s more Potter was doing the same style of contact work as he did in ‘Danger Man’s’ ‘Koroshi!’ And of course there is one further Potter in the series, Potter in ‘Do Not Forsake Me Oh My Darling,’ but played by a different actor.