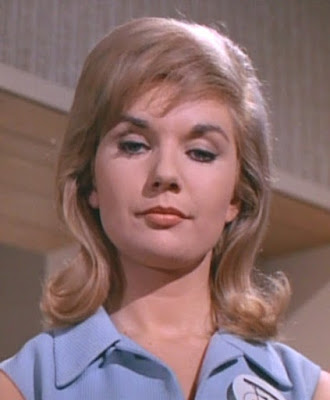 You may be an attractive woman, more feminine in that dress of yours than in slacks. But it must not be forgotten, your attractiveness should not detract from the fact that you carry out those appalling leucotomies. Because there is something about your eyes, there’s a coldness in them. Yes you may have found a more clean and clinical way of carrying out those operations, but the result is the same.
I can see the doctor-Number 23 carrying out such operations with her patients, she was the first to suggest a leucotomy be carried out on Number 6, and would have been pleased to carry out the operation herself I’m sure. But what drives a young attractive woman to do it? Perhaps like a former doctor in The Village, Number 14, you are coerced into carrying out such operations. Yet there seems no evidence for that supposition, as you appear to enjoy your work. However you’re not quite as clever as you think you are. In keeping a close eye on Number 6 yourself, you allowed yourself to be outwitted by him. You could say Number 6 pulled the rug out from under you? Get it, rug, pulled it out from under you, when you went to get it from the wardrobe! Then you let Number 6 turn the tables on you when he gave you a lesson in how to make the perfect cup of tea. Yes you managed to drop two Mytol {a sedative} pills into his teacup, but he swapped the teacups when your back was turned. And Number 2 wasn’t the least bit amused by that, he called you a stupid woman!
Then your doped state of mind left you wide open to hypnotism {is there nothing Number 6 cannot do?} you gave a full report of what had happened to Number 6. That he didn’t undergo the operation known as Instant Social Conversion, but instead had been given a dose of Mytol to keep him calm and sedated. And if that wasn’t bad enough, you denounced Number 2 as being unmutual, the final act of betrayal. But then as they say, we’re all pawns me’ dear!