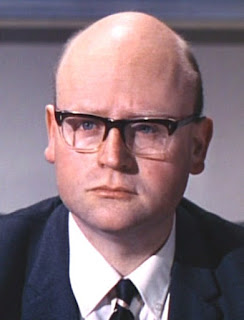 There are some enthusiasts of ‘the Prisoner,’ who consider this bureaucrat to be ZM73’s boss, on the grounds that it is to him that ZM73 hands his letter of resignation. However eventually this man is replaced, either he’s been promoted, or moved on to another department, or simply went on holiday. Because at some point this man, Jonathan Peregrine Danvers takes over the position.

So with the original thinking, would this then make Danvers ZM73’s boss? It seems highly unlikely, judging by the way ZM73 pulls him out of his chair by the lapels of his jacket, and the way he talks to him about his experience in the typing pool! Its Sir Charles Portland ZM73 demands to see, seeing as he’s outwardly the 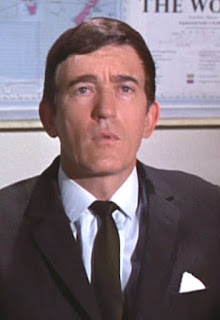 Colonel. Because it’s Sir Charles who’s the boss! And also Danvers importance, or lack of it, is demonstrated when he is told to leave the room by PR12. No, for me both these men are the first point of contact within the department. The room is a kind of reception, and the man sat behind the desk no more important than a receptionist might be. That’s not meant unkindly, it’s just the manner of the job.