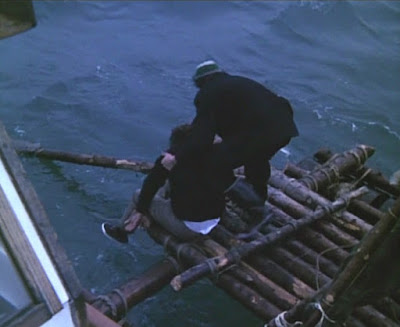 The two crewmen of a motor cruiser have come across a raft. On board a man has collapsed, and appears dead. The men turn out to be gun-runners, although personally I’ve always been rather sceptical of that. They take anything they can from the raft, I don’t know why they bothered to do that, as there couldn’t have had anything of value aboard. But apparently these two gun-runners enjoyed eating Number 6’s Village Food. Cold tinned corned beef, baked beans, and tin of fruit, possibly apple or pear.
Then just as they cast off, Ernst tips the body of the unconscious, possibly dead man from the raft into the water. Why, when it would have been simpler to just leave the body on the raft! However the act of dumping the body in the water did have the effect of separating it from the raft, and the cold water would have brought Number 6 to his senses, had he not already come round. If he been left aboard the raft, Number 6 couldn’t have got aboard the vessel unseen!
So there he is floating in the water, playing dead it would seem. Then the crewman casts off, leaving the raft adrift. The pair of diesel engines are revved, which makes Number 6 swim towards the stern of the vessel. The engines are left to idle, as Gunter doesn’t seem to be in any particular hurry to get the motor cruiser underway, to apparently give Number 6 time to scramble aboard the vessel, just before it gets underway.
If by any chance the cold water hadn’t brought Number 6 round, or if he was dead, one of the “gun runners” could easily have brought the body aboard, as they would have needed the body as evidence. Either way they wouldn’t have gone off without him. Because I think they were more than what they appeared to be. Not gun-runners, but the crew of M.S. Polotska, belonging to The Village, who had been shadowing Number 6 aboard his raft. After all they had turned up at a most propitious time, soon after Number 6 had collapsed in fact. How did the two crewmen know that he had? And how did they know Number 6 had been able to board their vessel, they didn’t check that either. They could have sailed off leaving Number 6 floating in the water! Perhaps they were sure of the man’s ability, if he was still alive. And Ernst didn’t even check to see if Number 6 was alive or not before he dumped him in the water. But if he hadn’t done that, and had left the body aboard the raft, Number 6 wouldn’t have been able to get abroad the motor cruiser without being seen, and then he would have died in an accident at sea. After all they had taken all of his provisions!