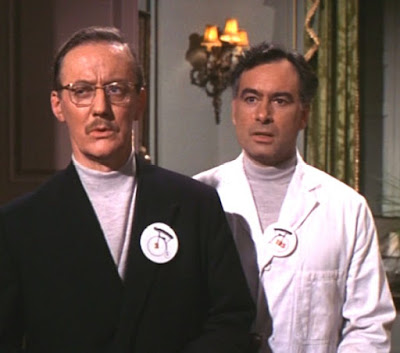 Pictured here with Colin Gordon in ‘the Prisoner’ episode ‘The General,’ Conrad Phillips plays a very attentive doctor to The Professor.

2015 was a year in which we saw the passing of several people who worked on ‘the Prisoner,’ and now Conrad Phillips died on January 13th aged 90.
He will be mostly remembered for his role as William Tell in the classis 1950’s television series. He was a man who was thought to have been in everything. I personally remember his excellent performances in a number of 1950’s films, and in 1961 he played Harold in the 1961 film ‘Murder She Said.’ But my favourite Conrad Philips film is ‘Impact’ {1963} in which he played crime reporter Jack Moir who is framed by a crooked nightclub owner, 'The Duke'. In prison, Moir plans his revenge.
Conrad Phillips, a very talented actor who had a very long Television and filmography stemming from 1948 to 1991 after which he retired, living out the rest of his life in the Netherlands.
Conrad Phillips 1925 – 2016 Rest In Peace

BCNU
Posted by David Stimpson at 08:25