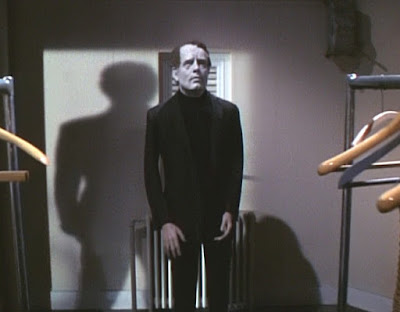 This wasn’t the first time Number 6 had come face to face with himself in The Village, and as it was to work out, it would not be the last!
The first time Number 6 faced himself he was The Schizoid Man, and contrary to whatever Number 6 might have said, it must have been greatly unpleasant for him to stand there and see himself suffocated into unconsciousness, even death by the membranic Guardian!
Then it must have come as something of a surprise to come face to face with himself again, but as a piece of sculpture {which could be ironic considering his own piece of abstract sculpture} in the drawing room of the Professor’s house. Especially surprising when he had no prior knowledge of the Professor, let alone Madam Professor!
In ‘Dance of the Dead’ Number 6’s own suit of clothes had been delivered to him especially for the occasion of Carnival. Number 6 took this as a sign that he was “still himself!” And here he is again, in a cloakroom, indicated by the two racks of coat hangers, void of any clothes. Perhaps the white robes worn by the delegates of the Assembly hung on them. I have never counted them against the number of delegates. Number 6 comes face to face with himself once again, well the Supervisor said that they thought he would feel happier as himself. So the Prisoner-Number 6 has emerged from his ordeal strong and intact! And yet as Number 6 approaches his effigy at the far end of the cloakroom, he puts a hand to the throat of his effigy, and just for a moment, and it is only a moment, it seems as though he was about to strangle the life out of it. But then changes his mind and begins to unbutton the polo shirt instead.
And finally the former Number 6 comes face to face with Number 1, as himself, and face to face with himself! However as meetings go there’s not that much to it. If we thought here was to be some meaningful discussion between the former Number 6 and Number 1, then we were to be disappointed. The only meaningful moment between the two comes when Number 1 hands the former Number 6 a crystal ball in which his future is foretold….. as a Prisoner! It is a future which is rejected, as the former 6 allows the crystal ball to slip through his fingers, and shatter into a thousand pieces of crystal on the floor. What’s more had the former 6 been able to lay his hands on Number 1, he might well have strangled the life out of him. Which might well have been as unpleasant for him as it probably was when he stood watching himself being suffocated by the Guardian. And really, to have had Patrick McGoohan fighting with himself again, would have been one repeated scene in the series too many!