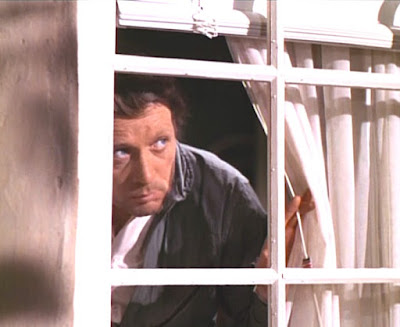 Number 6 was about to leave his former London home, when Mrs. Butterworth said he mustn’t go like that. So he washed and shaved, and was given clean clothes to wear.
Number 6 arrived at No.1 Buckingham Place on March 18th, the following day being the 19th is his birthday. After his report to the Colonel, Number 6’s report is checked by a local policeman who checks the Gypsy campsite, and possibly a Special Branch who goes to question Mrs. Butterworth. And then with the aid of a Naval Commander and RAF Group Captain, calculations are made to ascertain a search area for the Village. All this, along with the organising of an aircraft, so to refuelling at RAF Gibraltar would take time. It might be suggested that it was all accomplished in a day, so that Number 6 would arrive back in The Village in order for Ms. Butterworth to present him with a birthday cake, which she had promised to bake, if he promised to come back. Well Number 6 did come back. And Mrs. Butterworth did present him with a cake, suggestive of a birthday cake, suggesting that Number 6 arrived back in The Village the very next day on March 19th being Number 6’s birthday. But the cake wasn’t a birthday cake, as there were only six candles, making it more of a homecoming cake. After all Mrs. Butterworth-Number 2 said “Many happy returns” not “Many happy returns of the day” as she might, had it been his birthday. Yet strangely enough, originally the Brass Band was to have been playing the tune “Happy birthday to you.”
We do not know how long it took to search the 1,750 square miles, although it may not have been necessary for Number 6 to make a complete search of the area before he found The Village. However judging by the amount of stubble on Number 6’s face, it took more than a day to find The Village, seeing as he was clean shaven when he set out from an airfield in England! Or then again, perhaps it was possible for Number 6 to grow a moustache overnight!