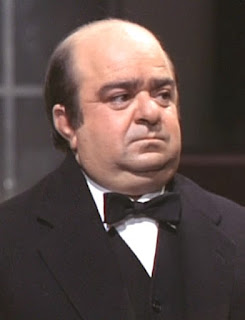 Degree Absolute began for me, although I didn’t realise it at the time, with the return of a former master. He wasn’t at all happy at having been brought back to The Village. I brought him breakfast, but all he did was shout at me to remove it! He told me to remove it! But he wanted the coffee, the coffee leave it! I didn’t see Number 2 again until he telephoned me from Number 6’s cottage, he told me to get a wheelchair. Where was I to attain a wheelchair? So when having attained one, I pushed it over to ‘6 Private,’ where Number 2 told me we were going to take Number 6 walkies! Walkies, I ask you, and who do you think pushed Number 6 all the way around The Village in that wheelchair…..me! And sometimes we had to take the long way round because the wheelchair couldn’t manage the steps! And there was something different about Number 6, he didn’t seem himself, he was like a child. We even stopped to buy the child an ice cream!

But then back in the Green Dome, I set off for the Embryo Room. In fact I was the first one in there, in the pitch black, standing in a baby’s playpen, shaking a baby’s rattle! Can you get more surreal than that? And who turned the light out? Anyway there I was, ready to serve my master, and assist in anyway I could. I helped provide the costumes, performed special effects, acted as a police constable. And rendering Number 6 unconscious with the aid of a truncheon, when he was half killing my master!
I cooked their meals, did the washing up, fortunately there were no beds to be made up. It was really a very intense week, and from time to time I would play the organ to try and lighten the mood. My master was under a great deal of stress, he’d gone without a night’s sleep and straight into a psychological battle with Number 6, his one aim to discover the reason behind the Prisoner’s resignation.
In the end stress began to tell on Number 2, and eventually he and Number6 changed places, and soon after I changed allegiances. My former master was reduced to grovelling, and crawling on his knees, pleading with Number 6 to tell him again why he resigned. It was pitiful to see. And I eventually became his jailer, with the key to the cell door.
Was it the drink? Well if it was this Butler didn’t do it I can tell you that much. More likely Number 2’s death was brought about by the stress of the situation, a heart attack. It was a poor end to a most capable, likeable chap, who put his life on the line for the cause! Finally to be sealed in his own mausoleum.
The time lock eventually released the door and the Supervisor entered. He asked Number 6 what he wanted, who responded “Number Once.” He seemed angry, smashing the glass like that, when the Supervisor said they would need the body as evidence. Number 2 once said that he was beginning to like Number 6, I think the feeling was reciprocated.