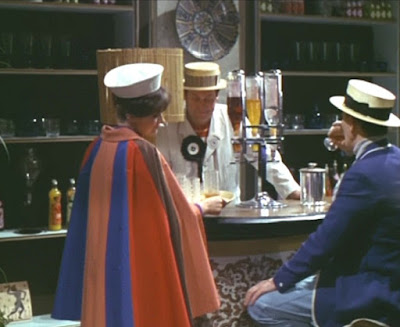 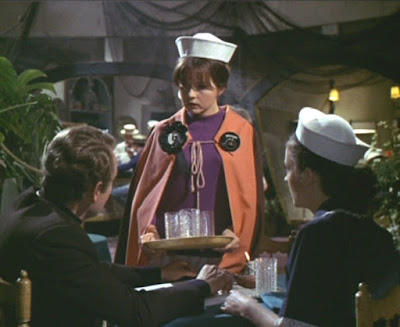 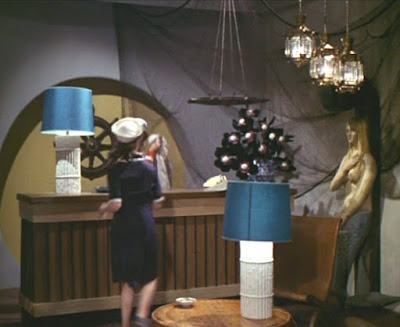 Just diagonally opposite the cottage of ‘6 Private’ is the Cat and Mouse nightclub {members only} which when considering the cat and mouse games between Number 2 and Number 6 is aptly named.
The door to the night club leads into a small foyer with a cloakroom desk, decorated with fishing nets, a wooden carved mermaid, a ship’s wheel hangs on the wall, and two matching table lamps sit on a table and upon the desk. There is also a wooden chair. A second ship’s wheel hangs from the ceiling as well as three brass light fittings. Also upon the desk in a blue and white vase, fake flowers, and a white telephone.
Inside the club itself music issues from a number of black speakers upon the wall, and yet an automatic drum kit plays, and a plaster lion rotates back and forth on a plinth. There is a regular looking bar with a three bottle optics, and a large number of bottles and glasses adorn the shelves behind the bar. Drinks are served by a bartender who looks more like a fishmonger in his straw boater and white coat. I suppose he’s supposed to be a steward! A waitress service is provided ready to serve the customer non-alcoholic drinks. Gin, whisky, vodka, looks the same, tastes the same, but they won’t get you tiddly!
Large alcoves fitted with tables and chairs for the customers line a circular wall, with fishing nets suspended from the ceiling, and large plants in planters are scattered strategically about the room. A young woman walks about the nightclub carrying what looks to be an incense burner. There is a small dance floor, but the only dancer to the music is a little old lady in a big floppy hat!
The only real peculiarity about the Cat and Mouse nightclub, is that it has never been seen before, seeing as its just a step or two away from Number 6’s cottage. And that after that night during the election periods, the night club is never seen again, not even the sign which adorns the wall above the archway!