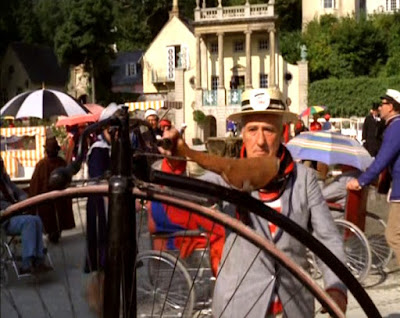 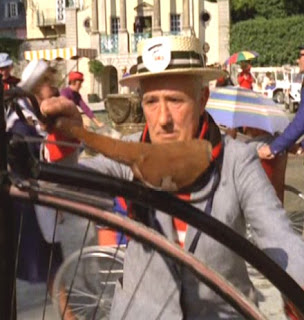 We have seen doubles, twins, look-a-likes, doppelgangers, call them that you like, from the electrician and gardener onwards. The man who is about to wheel the Penny Farthing bicycle away is Number 243. A few minutes later we see this man, walking passed the electric’s truck, as the Prisoner makes his way to the Labour Exchange. 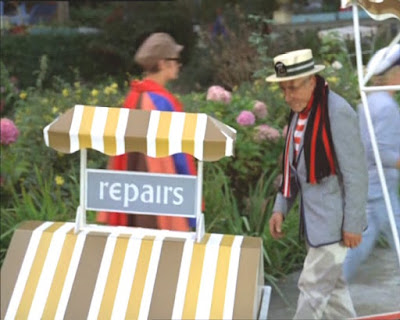 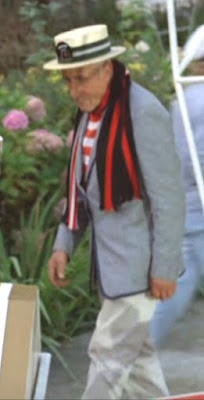 It’s impossible to make out this citizen’s number, but you will observe that his badge is of the negative kind, rather than the positive, black not white. Otherwise there is nothing to distinguish between them, seeing as the two men are dressed identically, and are of the same physical appearance. So they must be another set of twins. The first case of twins to be seen in ‘the Prisoner!’ Either that, or they are the same man!
After Number 243 wheels away the Penny Farthing, he wheels it towards the Gloriette. At one point the bicycle {because of its pair of stabilising wheels} is left to stand alone and there is no sign of Number 243. Then a few, moments later as Number 2 gives the Prisoner directions to the Labour Exchange, the man is standing by the bicycle. Except its not Number 243, it’s his double with the black badge pinned to his straw boater! 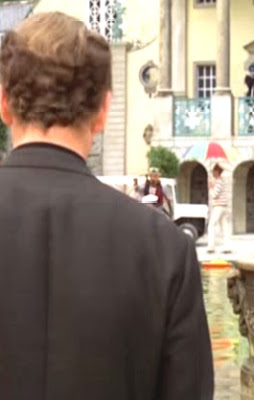 This man then walks away from the bicycle, and is the man seen walking passed the electrics truck! If this is not a case of twins, doppelgangers, or even a simple look-a-like, then both men must be the same man. As for the change of badge, that could be deliberate, to suggest that the two men are identical twins. And in being dressed the same, as twins sometimes often do. The use of a negative and positive Penny Farthing badge is an easy way to distinguish between the two. Although one would think that a number would be good enough for that. Other than that, I can only think that the film extra in having wheeled the Penny Farthing bicycle away, lost the white badge pinned on his boater, and was replaced by a black one. If that was the case, then so much for continuity!