A favourite Scene in THEPRIS6NER 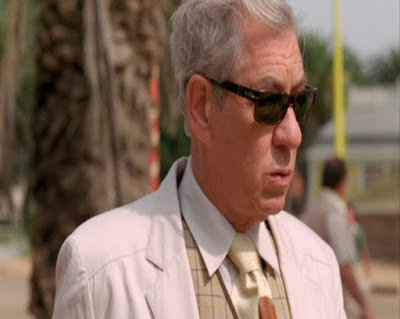 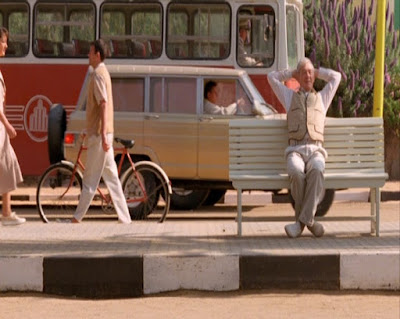 In ‘Schizoid,’ when Two goes out into The Village after Six has warned him that two-times-Six wants to kill him.
“Who is he?”
“Who is who?”
“There’s a man in The Village, who looks like me, exactly like me. He says he’s going to kill you.”
“Six if going to kill me!”
“No he’s going to kill you!”
“Oh, and that Six, he’s angry. Well isn’t that how you feel? Come on admit it, You’d love it, love it a chance to kill me.”
“After what you’ve done, yes I’d like you dead.”
“So you will be the assassin, isn’t that logical? Don’t we live by logic?
“Not your logic. Not any more. And your game, what you do to me here won’t stop me.”
“Are you quite sire it is a game?”
“Yes. Cause no-one gets close to Two unless Two wants them to.”
“Well perhaps he will. Perhaps the moment will come. I’ll walk today…be seeing you.”
As he walks through The Village {to the song You Are My Sunshine} Two discards his cloth cap, his gloves, his walking stick he places in a litter bin. He takes off his jacket and drops it in the road. His tie removed dropping it in the wicker basket on a bicycle as a woman pushes it passed. Taking off his sun glasses Two pauses and places them on a schoolboys head. Then as Un-Two he sits down on a bench to enjoy the sunshine, as
the following announcement is made over the public address system.
“Impersonating Two is an act of treason. In the event of a Two impersonator arising, you must seek him out and apprehend him. This man may look like Two, but you will know that he is not Two, because he is not Two. He may appear in the Village in a dishevelled state, which has resemblances to Two. He may claim to be Two, but he is not, and he must be treated as who he is, which is some one who is not Two. He is a danger to the Village.” Which must have been pre-recorded by Two.