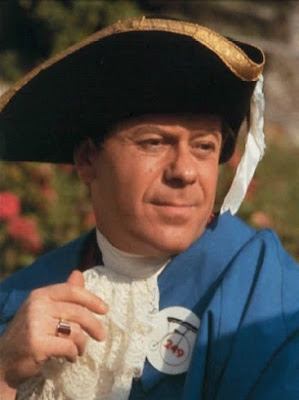 Actor Aubrey Morris passed away on July 15th 2015 at the age of 89, whose character in ‘the Prisoner’ episode ‘Dance of the Dead,’ is Number 249 the Town Crier. And perhaps because of having heard of Aubrey’s death, I found myself thinking of this character the other day. Wondering how it was that the Town Crier became one of the three Judges in the trial against the Prisoner? After all, unlike his two fellow Judges the maid-Number 54 and the doctor-Number 40 {although his case indirectly}, he had had no previous contact with the Prisoner-Number 6. I should have thought that one of the two Supervisors, especially Number 22, would have been better placed to be the third Judge. And yet Number 249 takes the position of lead Judge, and after some little deliberation with his fellow Judges it is he who dons the black cloth, and proceeds to pronounce judgement over the Prisoner in sentencing him to death. I should have thought that particular task would have been far better suited to Number 40, the doctor!