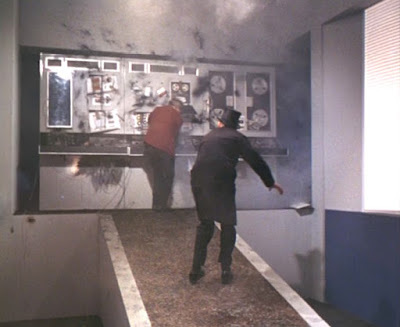 Poor old General! It couldn’t answer 6’s question of WHY? because there was a lack of sufficient basic facts that’s why! And that’s what Number 6 hit on when Number 2 said “The General can answer any question given the basic facts.” And yet computers just don’t blow their circuits and self-destruct when they cannot answer a question. The scene in ‘The General’ self-destructing, with the Professor attempting to turn it off, and Number 12 attempting to save the Professor, is visually dramatic. Had the General simply come out with an answer such as “There is as yet insufficient data for a meaningful answer,” quoted from the Isaac Asimov short story ‘The Last Question’ brought to my attention by Arno in a recent comment. Then visually that would have seemed like something of an anti-climax to ‘The General.’ Also had the General not self-destructed, then the Professor would not have died, and therefore not Number 12 who would have gone on to be uncovered by Number 2 as being a traitor and conspirator with Number 6. And the educational experiment of Speedlearn would have gone on virtually uninterrupted, once the Professor had endured a little more mild therapy of course. So in the end the General had to be destroyed, even if Number 6 had not involved himself, the Professor wanted the General destroyed, and therefore would have found another way….eventually.