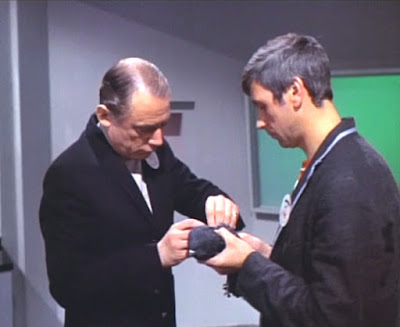 What’s Number 6 doing with that pigeon? He’s attached a message to one of its legs! The new Supervisor-Number 60 gave the order to track that bird. Tracking the bird, then the Beam was activated, the Beam being an electronic defence system.
“Yellow, tracking, orange…..it’s out of sight!”
The bird flying away from The Village was then fixed on radar. The order “hellfire” was given by the Supervisor. But Number 2 entered the Control Room and intervened, he wanted that message, giving the order for the Beam to be set at minimum strength, which had the effect of stunning the pigeon. Instead of it being blown to bits, or even vaporised! I wonder how long it took them to find that pigeon, and how discriminate was the beam when activated? It could have stunned any bird in flight. I hope there weren’t too many pigeons flying about that would have delayed the search even longer, looking for a pigeon with a message attached to its leg. For all the good the message was in the end!