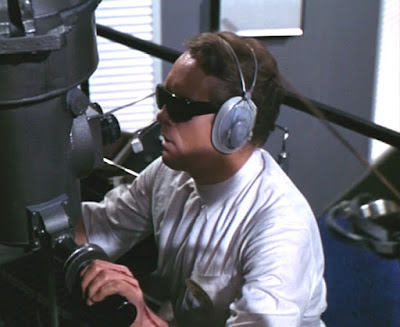 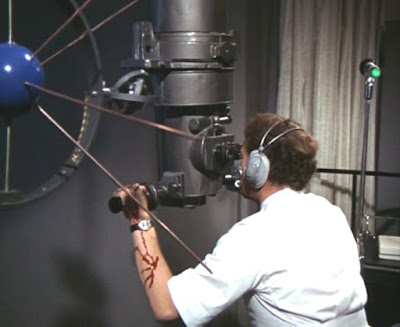 In the Projection Room, a projectionist is preparing to transmit the Professor’s next lecture. He is attacked by Number 6, who is in disguise as Number 56 of Administration, takes his place.
With hindsight, having seen the episode, we know that the projectionist sits looking through that periscope, at whatever it is he looks at during the transmission of the lecture. However in the episode, having taken the place of the Projectionist, how did Number 6 know to look through the periscope? Because when a voice through the black speakers urging Projection to “clear,” Number 6 removes the head-set and white tunic of the Projectionist then hurries up onto the mezzanine level. Then he automatically goes to the Periscope, pulls the two hands down, and then the periscope and announces “All clear, standing by.” Number 6 had never seen the projectionist at the periscope. There was no way he could have known, so he must merely have assumed that is what he should do.
On the other hand, it’s quite on the cards that Number 6 would have been briefed by Number 12 of Administration on what to do with that metal pen refill containing the Professor’s lecture, and therefore the operations of the Projection Room when he went to his office. That would of course presuppose that Number 14 actually knew the operations of the Projection Room in the first place. That was when he was given the two security pass discs and the uniform of Administration and badge of Number 56. So he could easily have been briefed on the use of the periscope. That would be one explanation. But with Number 6 having effectively taken the place of the projectionist, what exactly was he looking at through that periscope?