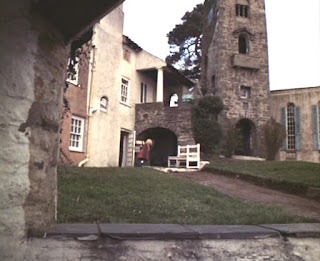 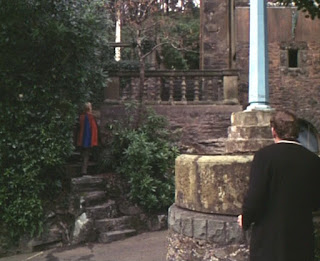 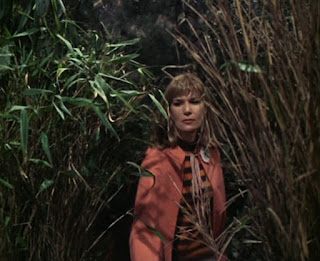 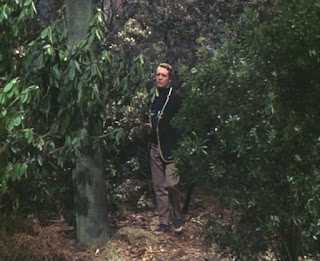 In ‘A B and C’ Number 6 first realised that something was going on, when standing at the door to his cottage, he saw Number 14 who was buying flowers from a flower seller. Then he suddenly looked at his right wrist and saw the needle puncture mark. Later, on the lawn of the Old People’s home Number 6 approached Number 14, asking her enigmatically “How does one talk to someone who that one has met in a dream? After that he pays a call on Number 2, perhaps to try and confirm his suspicions. There he pours Number 2 a glass of milk deliberately showing the bruised needle mark on his right wrist. “Anyone who had nothing to hide would ask where I got it.” “Where did you get it Number Six?” “In my sleep.” “Oh you must have been restless. Perhaps you need a check-up.” “I have a favourite doctor.” “Really.” “Number Fourteen.”
Then one morning Number 6 wakes up, he lies in bed looking at the cup and saucer on the bedside table, realising that he had been sedated by having drunk his nightcap of hot chocolate. He sits up on the edge of the bed, it’s been another rough night, perhaps an after effect of the doctor’s drug, or the simple fact that he’s had another over active dream. He looks at his right wrist again….there’s a second puncture mark!
Number 6 is only able to arrive at an understanding of what the doctor-Number 14 and Number 2 have been doing to him, by having followed the doctor through The Village, and through the woods to the laboratory. Why Number 6 wasn’t picked up by the Observers via the surveillance cameras is another question. But if they had picked up on Number 6 following Number 14, and had they informed Number 2, he would have been able to stop Number 6 from discovering the laboratory, and thereby from gaining entry. But Number 6 was able to follow Number 14, and he did manage to gain entry into the laboratory after the doctor had left. And he was able to put things together in order to come to understand what it was they had been doing to him. The fact that they had not only got into his dreams, but were able to manipulate them, and at the same time was able to dilute the third dose of the drug.
For me the laboratory in the woods seems to have been a contrivance on the part of scriptwriter Anthony Skene. Because had the experiment using the doctor’s new drug taken place at the hospital that would have made it far more difficult, if not impossible, for Number 6 to gain access and discover, as he had in the laboratory, what it was that had been taking place.
On the other hand, as it stands, Number 6 was only able to discover the laboratory hidden away in the woods, because he was able to follow Number 14. But what if Number 14 had not gone to the laboratory that time? Number 6 would have remained in the dark, the third dose of the drug wouldn’t have been diluted, and the experiment would have run its true course. But whether or not Number 2 would have discovered the reason behind the Prisoner’s resignation is extremely doubtful. Because whatever it was, he wasn’t selling out!
What were Number 14’s reasons for going to the laboratory at that time? After all she didn’t seem to do anything of any great importance while she was there. But perhaps that was a ruse. As a friend of mine recently suggested to me, perhaps Number 14 wanted Number 6 to know about the laboratory. That she wanted him to break into the laboratory, to confirm his suspicions about the experiment being conducted on him. So Number 14 may have realised that she was being followed by Number 6, through The Village, through the woods, and so purposely led Number 6 to the laboratory. And upon making the discovery he did, he would in some way attempt to sabotage said experiment. What might Number 14’s reasons be? To use Number 6 against Number 2 so as to exact her revenge upon him, because of the way Number 2 had forced her to use an untested drug on Number 6, and if not, threatening to have the drug proved on her. As the doctor saw it, her drug had not failed, Number 6 had succeeded {a fact she seemed to be pleased with} with possibly a little help from her.