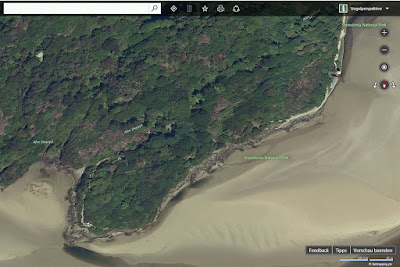 The above image is of a headland beyond The Village, the location for the lighthouse. You can hear its bell when Number 6 and Number 9 are on the cliff in attendance at Cobb’s supposed funeral. And just beyond the lighthouse the cove is where Number 6 found the body having been apparently washed up on the shore. Here he later casts the body adrift in order to send a message to someone, anyone, in the outside world.
And then there’s the other direction passed The Village, as in the next picture. 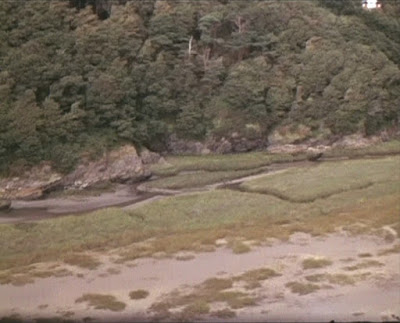 Here we see the cliffs and beach as they appear in ‘The Girl Who Was Death.’ When Mr. X, hanging onto the frame of the Bell Ten helicopter, looks down to see the cliffs and beach a few moments after the helicopter, with the Girl at the controls had taken off. In fact the way the film is edited together, it makes it look almost as though Mr. X is attempting to escape The Village by clinging onto the frame of the helicopter!