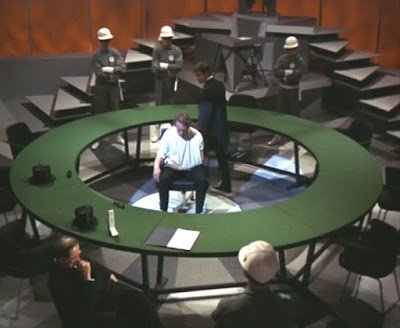 In ‘The General’ after Number 6, in the projection room, has been caught on camera by Number 2. He then under goes an interrogation with Number 12 asking the questions.
“Who are they Number Six, who let you in, what are their names? There’s an organisation, dissidents, who’s the head man?”
“Santa Clause!”
“Who is the head of the organisation” Number 12 persists “You’d be wise to tell us.
But Number 2 sees the Prisoner as not telling Number 12 anything. He’s a trained conspirator, a very hard man. This reactionary drivel, that Number 6 was at the point of sending out, to the conscientious students. The freedom to learn, the liberty to make mistakes, old fashioned slogans! Number 6 is an odd fellow, he’s full of surprises.
Anyway it’s nice to hear Santa Clause getting a mention at this seasonal time of the year, even though he doesn’t call in on The Village! Because as it happens Number 6 appears to have at last found a way to escape The Village, as Santa Clause!

Be seeing you…………….and the compliments of the season to you all.
Posted by David Stimpson at 08:56