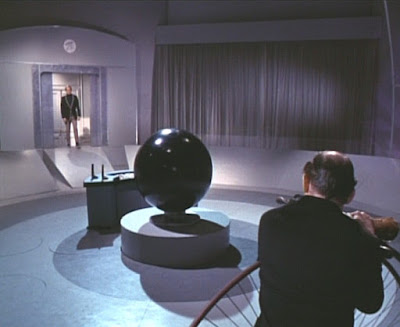 Number 6 pays a call on Number 2, after he had received a visit from Number 14 telling him that he’s finished, and accusing Number 6 of putting the poison in.
Number 2 asks Number 6 what he’s doing there, he’s come to keep him company. He’s heard that all of Number 2’s friends have deserted him {not that he had many friends to begin with} that he can’t trust anyone any more {well he never did} pity. All that power at Number 2’s disposal, and yet there he is all alone. In fact Number 2 has never felt
so alone as he grips hard onto the Penny Farthing seemingly for comfort.
Number 2 asks what Number 6 wants? He’s come to talk, to listen. But Number 2 has nothing to say. But that’s not like the old Number 2, where is the strong man, the hammer. You have to be hammer or anvil, Number 2 saw himself as the hammer, but hammers break more than anvils. Number 2 claimed to know who the Prisoner is, who freely admits that he’s Number 6 {he can’t be feeling well} but not in Number 2’s eyes, he’s D6, who was sent to The Village by their masters to spy on Number 2. He had been onto him right from the very beginning, he knew what D6 had been doing, so he can stop acting now. All those messages he sent, all the people he recruited, Number 2 knew Number 6 was a plant, he didn’t fool him. {Number 2 fooled me almost 50 years ago, because I thought he had got it right, that Number 6 had been a plant} the only trouble was, Number 2 fooled himself! Supposing for a moment that Number 2 had been right, that Number 6 had been planted in The Village by XO4, in order to check on Village security, to check on Number 2. But then Number 2’s first duty as a loyal citizen should have been not to interfere, but he did interfere, he admitted that much himself. There’s a name for that, sabotage! Who is Number 2 working for? For the power behind The Village, he protests. But he could be working for the enemy, or he could simply be a blunderer who has lost his head, either way Number 2 had failed! And they do not like failure here {that’s funny, I thought they never failed}. Number 2 saw it as Number 6 having destroyed him, but no, Number 2 destroyed himself, it was a character flaw, a weak link in the chain of command waiting to be broken. And any chain of command is only as strong as its weakest link. Number 2 begs Number 6 not to report him {I should imagine that Number 1 knows already considering that first scene in Number 2’s office} but Number 2 is to report himself. Had Number 6 picked up that oversized curved red telephone and reported Number 2 himself that game he had been playing would have been up for Number 6. Hence Number 2 having to report a breakdown in control to Number 1, breakdown being the optimum word.