Yesterday was a bumper postal day, and amongst the post was a brown jiffy bag. And upon opening it I discovered, much to my high delight and surprise, a sealed copy of the De Agostini Prisoner part-work DVD ‘Living In Harmony.’ which I had been searching for, for years, to complete the set. I had originally bought the set from a charity shop, but it was missing ‘Living In Harmony.’ I had been unable to find it on ebay as a single disc, and then recently a large number of De Agiostini ‘Prisoner’ DVD’s appeared on two market stalls of the local market. Every episode of ‘the Prisoner’ was amongst them….except ‘Living In Harmony!’ The episode was sent to me quite out of the blue, by a good and long time friend, who for reasons of modesty will remain nameless. Much like The Man With No Name in this episode. However when he reads this he will know who I write of, and that is all that matters. 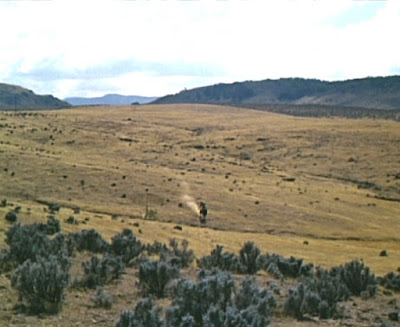 So last night I knew what would have to be done, and that was to watch the episode. A man rides across an open prairie. He eventually arrives at a Marshall’s office, where he hands in both his sheriff’s badge and gun. Later we see the Man With No Name’ walking and carrying his saddle. Either his horse had gone lame, or it went with the job like his handgun. However he is soon set upon by bushwhackers, and abducted to the frontier town of Harmony. If you want a reinterpretation of the regular opening sequence, then this is it, but within the original series. It may further be said that ‘Living In Harmony’ is a reinvention of ‘the Prisoner.’ In the opening scene The Man With No Name is riding a horse instead of driving a Lotus Seven. He hands in his badge and gun instead of a letter of resignation. And the pair of undertakers are replaced by a group bushwhackers.
So now my De Agostini Prisoner/Danger Man collection of DVDs is finally complete. Why didn’t I collect them when they were released at the time? Well to be perfectly honest I thought it was a very expensive way of collecting the two series. So I decided to bide my time, and pick them up from time to time, at a much reduced price. 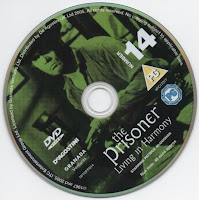