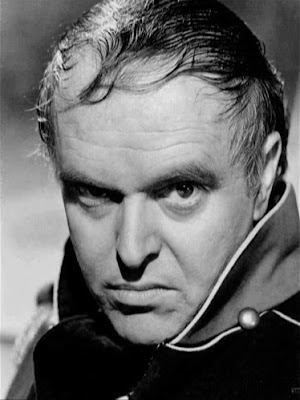 As Schnipps he’s a dangerous madman, hell bent on revenge. But there is a thin line between madness and genius, as demonstrated in his having built rocket, to be used to destroy London, into the lighthouse. But was the rocket to have had a neutron bomb as its warhead? Because even after the impact of the rocket much of London would appear to be left intact, such as Bond street, Wembley football stadium, and Chelsea Barracks, despite Schnipps saying that in one hours time London will lie entirely in ruins.
As for Number 2, the Prisoner’s fairytale appears to make fun of, to ridicule his desperate ploy to extract information from Number 6. Although the way in which Number 2 appears to be somewhat dispassionate about the ploy, it would suggest that the original idea for this latest plan lay with Number 1.
Number 2 switches off the wall screen, he turns in his chair with a shrug. “He might drop his guard with children….he might give something away. He told them nothing! He told them a blasted fairytale….that one wouldn’t drop his guard with his own grandmother!”
Well it was worth a try Number 2, anything is worth a try…..once!