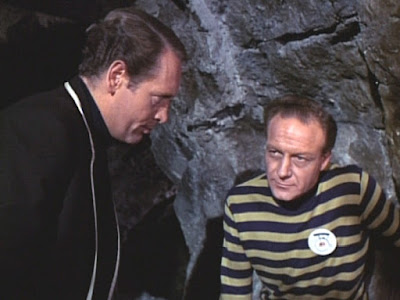 It’s as Number 2 once told the Prisoner on the day of his arrival in The Village, “You might even meet people you know.”
Well Number 6 certainly knew this man, Andy Edwards.
“I don’t believe it, John, John Drake, you, of all people!”
“Hello Andy.”
“You’re the last person I’d thought to see here.”
“I never expected to see myself here!”
“How long have you been here?”
“Quite recently. You?”
“Weeks, months, its so damn difficult to say.”
“The last time we were together……”
“It was in my office, we were listening to two tape recordings relating to the Jordan’s, Basil and Claudia.”
“Should we be discussing that?”
“I don’t think we’re breaking the official secrets act. And even if we are, it hardly matters here”
“Quite. So what brought you here?”
“I’ve no idea. I resigned…..”
“You resigned, from the department?”
“Yes.”
“Whatever for?”
“I had my reasons. Anyway I went home, collected my passport, airline ticket, and two suitcases, I remember looking out of the window, I must have passed out……… I woke up here!”
“And now?”
“What do you mean?”
“You could be working for them!”
“I’m a prisoner here.”
“Have you met the Doctor?”
“Who?”
“He’s not here is he?”
“Who?”
“If he is he’ll have his Tardis with him.  Or perhaps that’s why he’s here, because of the Tardis.”
“Are you alright Andy?”
“No. They keep asking me questions.”
“You’ve told them?”
“What do you think?”
“I haven’t told them anything.”
“Well you would if you’d had your privates wired up to the electric mains!”
“As bad as that?”
“Worse if anything! Can you get me out of here before it’s too late?”
“I’m not sure if I can get myself out.”
“No, it’s not like Colony Three, you had a man on the inside of Section One that time, he got you out.”
“No, there’s no-one on the inside this time Andy, and even if there were…………”
“You don’t know if you can trust him.”
“Arthur, the Colonel?”
“Fotheringay and the Colonel.”
“Ah, looks like we’ve both been stitched up good and proper.”
“How’s London?”
“About the same.”
“Places don’t change, only people.”
“Some people.”
“You’ve changed, you’ve resigned, you’re not one of us any more.”
“But we are in the same boat.”
“And sinking fast by all accounts.”
“There’s always hope.”
“Abandon hope all ye who enter here, they should stick that edict up on a sign!”
“I’ll talk to Number Two.”
“You think she’ll listen?”
“Shouldn’t think so.”
“Then I’m dead!”