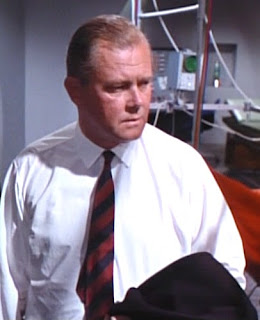 Having undergone the mind transference with Number 6, the man has all unpleasant memories of The Village wiped from his memory, and is taken back to London to wake up in his home of No.1. Buckingham Place. He tries to convince Sir Charles Portland of his identity, but has little luck. However he does have better luck with Janet Portland, by giving her a message only he can give. He then sets out to find Professor Seltzman, which he eventually does, in a Barber’s shop in the Austrian town of Kandersfeld.

Both the Colonel/Number 6 and Professor Seltzman are taken back to The Village in order to put both the Colonel and Number 6 through the mind transference once more. However Professor Seltzman had progressed further than anyone could have imagined. He did change the minds of three men at the same time. The mind of Professor Seltzman now occupies a body, perhaps not to his liking, the Colonel’s.
So what then? Seltzman leaves The Village in the guise of the Colonel, and is taken to the landing stage by helicopter. But beyond that, where can Seltzman go? After all he doesn’t have a passport in the Colonel’s name with the appropriate face in it. But perhaps we are not supposed to think too deeply about that, if at all!
When Number 6’s mind was housed in the Colonel’s body it is Number 6’s mind, we as the television viewer hear thinking. But it’s the Colonel’s voice we hear when the Colonel speaks. Probably due to the Colonel’s voice box. So Seltzman might well retain his own handwriting, as Number 6 had, but he would have lost his Austrian accent.
So having changed the minds of three people at the one and same time, Professor Seltzman was then free to continue his experiments in peace, but where? How? He has no passport for travel, he appears to have no apparent sign of funds. And even if he has funds in a bank, how can he go to his bank in order to withdraw money? Yes his handwriting would remain the same written on the withdrawal slip, but the face over the counter would be different. And as the Prisoner once suggested to himself, Seltzman would be arrested for forgery! But again I suppose we’re not supposed to think too much about that, but to simply
accept that Professor Seltzman is the one who got away!
Be seeing you