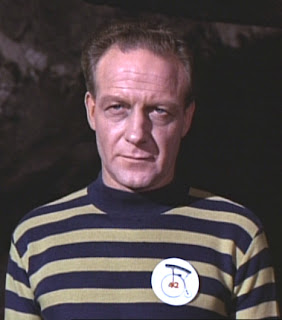 No.42 Roland Walter Dutton, a man who was openly experimented on, and used in an experiment on No.6 in order to get him to give a breakdown on everything he knows, all the files he'd seen, the projects he knows about, just headings not details.
The doctor-No.40 saw Dutton has being rather difficult, that he'd given the doctor rather a lot of information, but that he is reluctant to go further. Well Dutton couldn't go further, as he didn't know any more, not having had access to the "vital stuff."
Roland Walter Dutton is a man No.6 thinks he once knew. 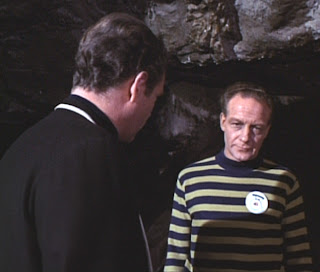 Well No.6 got that about right. They met in the Village during that episode of Dance of the Dead, outside a cave down on the beach. Later they would meet at No.6's trial during the Ball in the town Hall, when No.6 called Roland Walter Dutton as a character witness. A man who was scheduled to die, and therefore better fitted to say the things that need to be said.
A man that No.6 thinks he once knew? Yes, but his name wasn't Dutton then, it was Edwards. 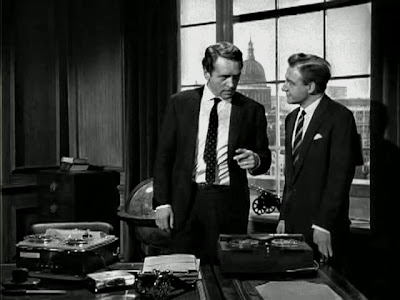 John Drake and Edwards pictured together in the Danger Man episode The Hunting Party.

No.6 had previosuly met up with Fotheringay in the Village, formally Mister Hardy in Danger Man, and even the Supervsor in Checkmate  was a contact man for Drake in the Danger Man Episode Say It With flowers.
I could go on to list a whole lot of people that No.6 had formally known, but that would simply get boring. suffice to say, fictionally, No.6 had met a good many people he had previously known, ex-colleagues who like No.6 are embroiled in the Village!

I'll be seeing you
Posted by David Stimpson at 09:47