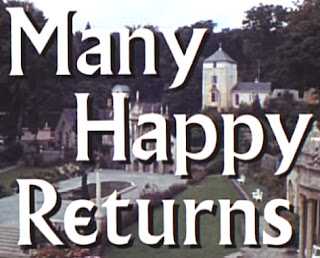 We learn that the Prisoner had leased No. 1 Buckingham Place, and that there was six months still to run on the lease. However, by the time of Fall Out the owners of said No.1 Buckingham Place had apparently put the house up for sale. Yet on the wall screen we are shown that the 'For Sale' sign is removed from the railings outside the house. So why have the owners of 1 Buckingham Place suddenly taken the house off the market simply to re-lease it again - unless the house has been sold!
So is the Prisoner to return to his former leased property? Remember that the Prisoner had been given the key to his house as part of a prize back in the underground cavern somewhere beneath the Village. Or could it be that as part of that prize, as mentioned by the President, is the house itself? Purchased by some govermental department, or some other such department or organisation, as compensation for what the Prisoner has been put through during those past fifteen months?
Well I've not thought of that before.......and to be perfectly honest it was my wife who put the idea into my head, and I thank her for it.

BCNU
Posted by David Stimpson at 11:21