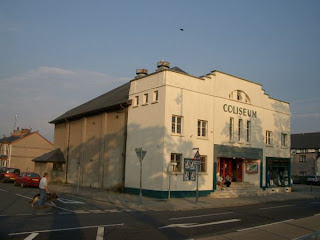 19 January 12 11:19
Campaigners working to reopen a Gwynedd cinema have secured a grant to explore plans to bring it back to life.
The Coliseum in Porthmadog closed last January and since then a not-for-profit company has been trying to raise funds to reopen it.
Group chairman Aled Jones hopes the study will validate the belief the cinema can be a vibrant business.
The picture house, which opened in the 1930s, was forced to close its doors amid dwindling audiences.
Mr Jones said despite the grant the Friends of the Coliseum's fundraising efforts were still important.
A condition of the Voluntary Development Fund grant from Gwynedd council is that the group initially funds the study, and then the council will reimburse them.
'Major step forward'
The study will look at the "overall viability" of the Coliseum whilst also looking at "specific actions that need to be taken to make it profitable for the future".
Necessary repairs to the building will also be investigated.
"The Coliseum needs quite a bit of TLC and the feasibility study is the first major step toward seeing its doors open again," said Mr Jones.
In 1985, 50,000 £1 shares in the cinema were sold to local people.
Many of those have now been traced, and the Friends are urging anyone who has not been contacted to get in touch.
"We hope to arrange, with the current Coliseum board of directors, a shareholding meeting in March that will determine the future of the building and the future of our not-for-profit group the Friends of the Coliseum," said Mr Jones.
The ideal would be to convince the shareholders to allow the group a long-term lease so that supporters can apply for more grants "so that a new generation can enjoy the magic that happens at the cinema".
Wyn Roberts of Aqua Marketing added: "I'll be looking at whether the building could be used as an arts centre, perhaps with the cinema also showing alternative films, live performances and then office space for young people who want a foothold in the performance based industry."
·                                 North West Wales
·                                 BBC News
BCNU
Posted by David Stimpson at 09:20