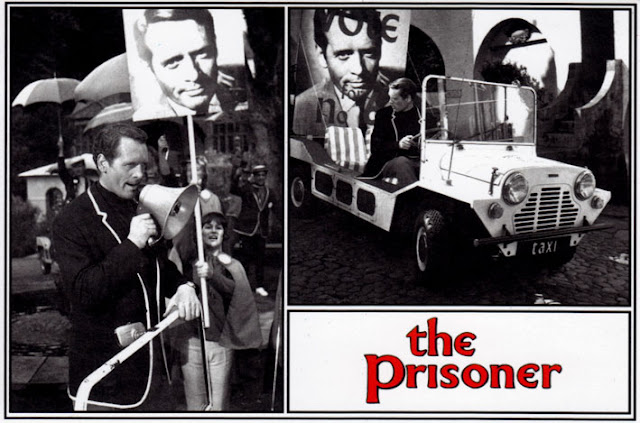 When all is said and done, the Prisoner known as Number Six, and later addressed as Sir {a form of polite address, and by no means suggests that the Prisoner has suddenly been given a Knighthood} came out of his fifteen month spell of captivity rather well. I mean he is unchanged, unbowed. Has retained his identity, along with the right of the individual to be individual. More than that, his Lotus 7 has been looked after, and made ready for him along with his house. Sir, as I shall address the Prisoner, is given a prize. The key to his house, a passport valied for anywhere, travellers cheques {a million} and a purse of petty cash. I mean Sir came out of it a millionaire!
So, wherever it was that the Scammell Highwayman Transporter came out of at the end of that tunnel, Sir could have jumped ship so to speak, {as Number fourty-eight does somewhere along the A20} abanondoning his fellow confederates and could have gone anywhere. Yet Sir is a very single minded person, and therefore he goes home.
I have always been of the belief that the Prisoner is a vicious circle, that the end of Fall Out is the beginning of Arrival and so therefore the series begins all over again, with Sir just as much a Prisoner at the end as he was at the beginning. But what if that isn't corect? What if, at the end of Fall Out the Prisoner isn't driving off to hand in his letter of resignation as he does in the opening sequence of Arrival. That Sir is still going to park his Lotus 7 in the underground car park in Abingdon street, and is still going to that office to present himself to the baldheaded, bespectacled man sat behind the desk, as the Prisoner does in the opening sequence, and in the episode Many Happy Returns. But what next? Surely the Prisoner had resigned, yet that did not stop him from running back to his old colleagues whenever he had the opportunity. So perhaps again Sir thinks that the only people who can help him with his dilemma are his ex-colleagues. And what might their reaction be, concerning a man who had disappeared not once, but twice!

Be seeing you
Posted by David Stimpson at 10:56