A Symbol of Freedom 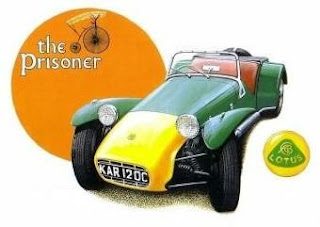 If there is one iconic symbol of freedom within the Prisoner, then it simply has to be the Lotus 7 - KAR 120C, pictured here on the open road.
The rain in your hair, the wind on your cheek, invigorating! And besides, it’s the only mention, or rather image, of a 7 in the whole series. And that in itself makes the Lotus 7 something of a rebel, but not so much of the "open road" is left in todays traffic!

The Italianate
Have you ever been to Portmeirion? I was surprised how small it is, not only in size, but in acreage! Oh, there is plenty of woodland, and the hills and mountains beyond. But Portmeirion itself. You have to go there yourself to realise that all in the village is not at Portmemrion at all, but a stage set built at MGM studios  like the Recreation Hall, is a back lot at MGM studios.
It was not until 1988 that I stayed at Portmeirion as a resident for a week, one teeney weeney week. On the first day I made the fatal mistake of trying to take all of Portmeirion in the same day. Dashing about here, dashing about there, and not really taking in anything at all. Not for the Prisoners sake, or for Portmeirion's own come to that. You have to sit down, look about you and observe.
It was an incredible thing really, the first time, to be actually there in Portmeirion, following in McGoohan's footsteps so to speak. Not only that though, but to be actually staying there, to wake up the next morning in the village! To go for an early morning stroll, the rain in your hair, the wind on your cheek, invigorating that time of day.
One day I shall go back there, when the need arises. Oh I always holidayed in Portmeirion once upon a time, well after 1988. Then there were Prisoner conventions, and the occasional day trip. Yes one day I shall return, and when ever I have before it's really like coming home. Its difficult to explain. But once you've actually stayed at Portmeirion, there comes a time when you have to leave, and then to go back. Oh it doesn't matter the length of time you have been away, because whenever you return its almost as though you've never really been away.
Just like Patrick McGoohan, Portmeirion too can make prisoners of us all.
Be seeing you
Posted by David Stimpson at 07:52