Where is the Village? Well we all know where it is now don't we, of course we do. It's either all in the mind, or a physical place somewhere south west of Portugal and Spain, perhaps somewhere on the coast of Morocco. But it's not is it? The actual location for the Village is that of Portmeirion in North Wales. It is a location which was to remain a closely guarded secret according to the Prisoner legend, only to be revealed in the opening titles of the final episode Fall Out, but even then at the time I was no more the wiser, I had to look Portmeirion up on a map! Mind you, I'm sure that the location of the Village, which was to be a closley guarded secret, was not really all that secret at all. Well there were the guests staying at Portmeirion for a sart, and then the day visitors who were allowed into the Italianate village during the production. All of whom would have seen what was going on, and even if they didn't understand at the time, when the series was shown on television they would have recognised Portmeirion, as would anyone watching the Prisoner for the first time in 1967 and had been to Portmeirion. As a boy of twelve I had not been to Portmeirion. I had never even heard of the place in 1968!
Imagine if you will, that you have never seen the Prisoner before, and that you have absolutely no idea where the Village is. There are a small number of clues to the Village's location {although when I first watched the Prisoner such clues went straight over my head, becasue I'd no idea of Portmeriion} such as the use of Portmeirion produced pottery the pattern known as Penny Plain for example. Pictured below is such a cup used by Patrick McGoohan in a scene from A Change of Mind as he tips his cup of drugged tea into a vase. Note the label on the base of the cup. 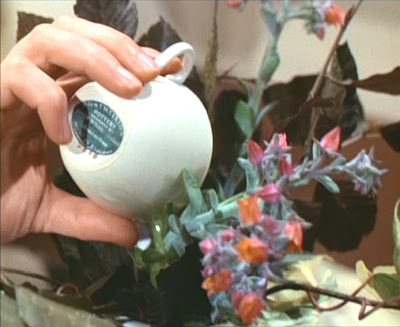 Another clue to the location of the Village appears in the episode A Change of Mind, in the address on the envelope which the Prisoner sent to Professor Seltzman when he was in Scotland, as seen below. 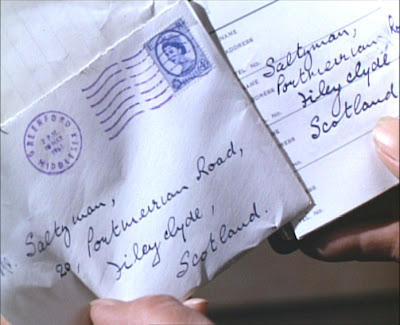 But of course you know all this don't you? Yet anyone recently new to the series may not, and you may not be aware that the letter which the Prisoner claimed to have sent to Seltzman over a year ago is actually postmarked May 10th or 18th 1961, that the 4d stamp on the envelope is wrong for 1961. There, you didn't know that now did you?