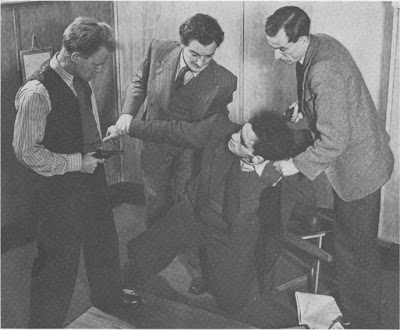 The "Rules of Conduct concerned a predecessor of 'Danger Man' John Drake. You didn't know Drake had a predecessor? Well perhaps not on television, but he certainly had on on BBC radio between 1946 and 1952, that of Dick Barton - Special Agent.
What follows is the list of the "Rules of Conduct," some of which may appear familiar to fans of 'Danger Man.'

"1, Barton is intelligent as well as hard-hitting. He relies as much upon brains as much as brawn.
2, He only uses force when normal, peaceful means of reaching a legitimate goal have failed.
3, Barton never commits an offence in the criminal code, no matter how desirable the means may be argued to justify the end.
4, In reasonable circumstances, he may deceive but he never lies.
5, Barton's violence is restricted to clean socks on the jaw. The refinements of unarmed combat taught to British Commandoes cannot be practised by him or by his colleagues. When involved in a brawl which ends in victory for the Barton side, he must be equally matched or outnumbered.
6, Barton's enemies have more latitude in their behaviour but they may not indulge in actually giving any injury or punishment which is basically sadistic!
7, Barton and his friends do not wittingly involve innocent members of the public in situations which could cause them to be distressed. For example, a motor car canot be requisitioned for the purpose of chasing bandits, without the owner's prior permission.
8, Barton has now given up drink altogether. No reference should be made to its existence in the Barton circle. The villains may drink but never to excess. Drunken scenes are barred.
9, Sex, in the active sense, plays no part in the Barton adventures. In other words, Dick has no flirtations or affairs and his enemies have no molls or mistresses {as opposed to partners}. This provision does not of course rule out the possibility of a decent marriage {not involving Dick personally} taking place.
10, Horrific effects in general must be closely watched. Supernatural or pseuo-supernatuarl sequences are to be avoided - ghosts, night-prowling, gorillas, vampires.
11, Swearing and bad language generally may not be used by any character. The ban ranges from 'bloody' through 'God,' 'Damn' and 'hell' to ugly expressions currently heard on certain conversations but not considered admissible for child usage in middle-class homes.
12, Polictcal themes are unpopular as well as being occasionaly embarassing. The-man-who-wants-to-control-the-Earth creates little impact and is best left out of the Barton world."

The above found in 'The Wireless stars' by George Nobbs, published in 1972.