Thought For the Day 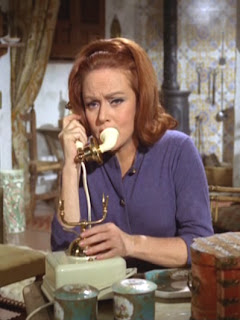 New arrival Nadia Rakovsky is described by Number 2 as suffering from "nervous tension," and has been brought to the Village to recouperate. Yet Nadia Rakovsky tells Number 6 at the door of the Green Dome, that she had done nothing wrong, that she had committed no crime. All she did was to resign.
During an interrogation session, Number 2 tells Number 6 "I don't really want to be hard on her, she's not at all important. I'm surprised that they even sent her here!"
So which is it? As we later learn during 'The Chimes of Big Ben,' Number 8 is a plant in the Village, so it would have been best to have got her backgound story right. As it is her cover storyis rather thin at best!
I'll be seeing you
Posted by David Stimpson at 08:52